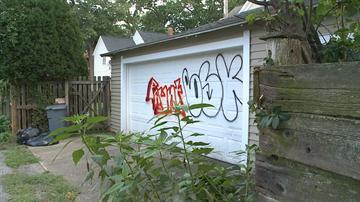 MISHAWAKA, Ind. – Graffiti vandalism is on the rise in Mishawaka according to those who live in the area of Merrifield Park.

Ed Blasko walks his dog Benny through the park on a regular basis and has noticed an unfortunate increase in the amount of spray-painted graffiti on the Mishawaka Avenue Bridge.

"In the last month it's been getting pretty bad,” Blasko said looking at the bridge.  “It’s sad…a park's a public place for people to enjoy and they don't need to bring their kids down to see, little kids, to see what's been wrote."

He said he usually notices graffiti in the park pick-up this time of year.  What’s not so normal is the streak of graffiti on homes, sheds and garages in one neighborhood across the river.  Over the past week those living near the 400-block of Park Avenue have found spray-painted graffiti all along their garages in the alley behind the street.  The scribbled drawings spell out “BSK” and “574” along with various names.

“It worries people in the neighborhood,” described Ed Blasko, who had the same thing happen on his street last year.  “You’ve got a lot of old retirees, they like coming down here and they see stuff like that and they get scared."

Blasko and those living along Park Avenue said they believe and hope that the graffiti is a result of boredom among a few kids and not something gang related.  He said he often does notice large groups of teens in Merrifield Park late at night.

The vandalism has been reported to the Mishawaka Police Department, officers couldn’t be contacted for comment on the incidents.