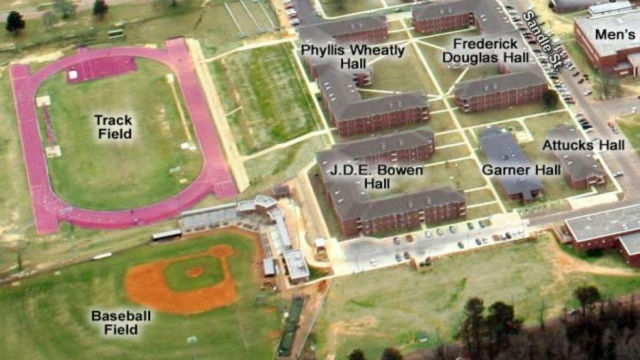 Police said they believe there was an altercation in a dorm room on campus, which led up to the shooting in a courtyard outside. Grambling State Edu

(CNN) -- Louisiana authorities on Thursday arrested a Grambling State University freshman in connection with the shooting death of a fellow student and another man on the campus early Wednesday.

Jaylin M. Wayne was charged with first-degree murder in the shooting deaths of Earl Andrews, 23, a Grambling State senior, and Monquiarious Caldwell, 23, both of Farmerville, Louisiana, the Lincoln Parish Sheriff's Department said. The victims were found in a courtyard between two dormitories after a fight in an adjacent dormitory spilled outside, the sheriff's department said.

Wayne surrendered to police on Thursday after learning there was a warrant for his arrest. It wasn't immediately clear if Wayne had an attorney.

Wayne allegedly shot the two men after a disagreement led to a fight between Wayne and Andrews. Caldwell was apparently shot when he tried to help Andrews, authorities said.

Caldwell was visiting Andrews on the northern Louisiana campus, according to CNN affiliate KSLA.

"I feel confident that our investigators have put together a strong case," Lincoln Parish Sheriff Mike Stone said Thursday in a press release.

Wayne is a freshman from St. Louis, Missouri, Grambling's president Rick Gallot said in a statement.

"Our thoughts and prayers continue to go out to the Andrews and the Caldwell families during this difficult time," Gallot said.

Stone said the shooting didn't bear "any resemblance to any of the random acts of violence or domestic terrorism that have been experienced around our country in recent weeks."

"There's no place for violence on the Grambling State University campus," university spokesman Will Sutton said told CNN affiliate KTBS after the shooting.