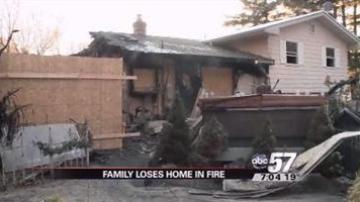 GRANGER, Ind -- A family in Granger awoke to their house in flames Saturday at Midnight.  The fire happened at 16650 Gerald Street.

No one was hurt, but the son who lived in the house says his mother's golden retriever, Mindy, is still missing. Ian says he did manage to get the dog out of the house, but when fire crews arrived she got spooked and ran away.

Ian Hinz went back to the house to try and collect and personal belongings that did not burn in the fire.  The house and three cars were destroyed.

"I was looking out one of the windows from where I am in the kitchen, a flame just came out and lit up the whole room and I say the whole room was covered with smoke, especially a thick black smoke on the ceiling", said Ian Hinz.

Ian says his mother is more sad about her dog Mindy than losing her home.  Ian and his brother Ray say if anyone finds the dog to please contact them at Rhinz12@aol.com or (574) 300-6656.