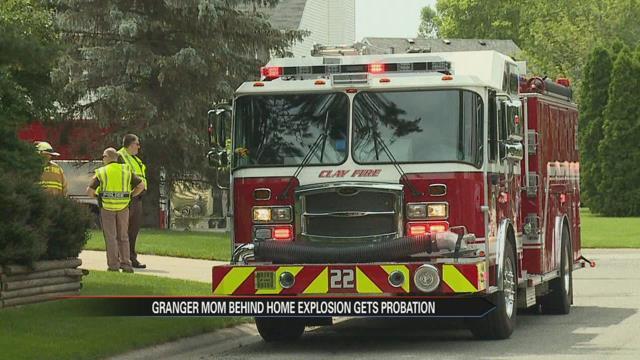 The Granger woman who caused her home to explode during a suicide attempt in June was sentenced to probation Wednesday.

Ellenberger, 51, must serve three years probation and pay over $12,000 to St. Joseph County for causing the explosion which injured herself, her daughter, her daughter’s boyfriend and a responding officer.

“The judge has given her another chance to get on with her life,” Olson said.

The sentence could have been nine years probation, three for each count of arson, but it was suspended.

“It was an appropriate plea we negotiated with the prosecutor, based on the facts and circumstances of the case,” Mike Tuszynski, Ellenberger’s attorney, said.

The case started in June when the mother of two attempted suicide by leaving the gas on in her Granger home while she was alone.

“Michelle’s intentions were just to hurt herself,” Olson said.

When Ellenberger’s daughter and her boyfriend came home, the home exploded.

“Clearly it was a dangerous situation,” Tuszynski said.

The situation was motivated by mental illness, according to the defense.

She says she’d attempted suicide multiple times before the explosion and told the court the medication she was on at the time had side effects, which made her suicidal.

“She wasn’t on the medication that she needed and she just didn’t feel she had a reason to be here anymore,” Olson said.

Now on new medication and in therapy, Ellenberger told the judge she’ll be rebuilding her life with her children.

“She loves her kids very much,” Olson said.

Ellenberger is also continuing her work at Granger Community Church.

Her coworkers came to court Wednesday to support her.

In addition to their relief from the sentence, Ellenberger’s family says they want to raise awareness about an issue much bigger than one woman and one house.

“My concern is the people out there with mental illness that do not have the support or the facilities to go to, to get the support that they need, or maybe the money for the medication, but we need more facilities, more support,” Olson said.