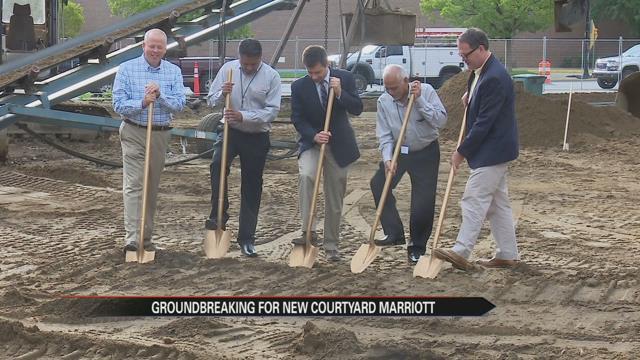 The new hotel will connect with the former College Football Hall of Fame building in South Bend.

“Everybody knows when you say College Football Hall of Fame, they know where it’s located,” President of JSK Hospitality AJ Patel said.

Patel’s company is in charge of the construction process.

JSK Hospitality bought the public space and intends to invest up to $14 million on the project.

“It really is an ideal outcome for this place,” Mayor Pete Buttigieg said.

Buttigieg says the Century Center and downtown in general are often passed up for major events, due to lack of hotel rooms.

“There have been a lot of expos, trade shows, conventions that have passed us by,” Buttigieg said.

That should change in about a year.

Once the Courtyard Marriott and Aloft, in the former Chase tower open, total hotel rooms downtown will go from about 290 to 610 for rent.

“We do believe it’s going to make for a stronger Century Center and therefore stronger economy across the region,” Buttigieg said.

Along with the new building, developers promise to keep the character of the old Hall of Fame.

The five-story hotel will include 140 rooms for rent.