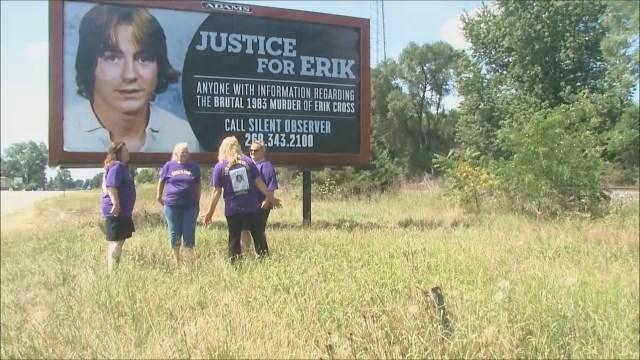 A group in Michigan has been raising money to help solve a Kalamazoo County Cold case and they’ve been collecting 10 cents at a time.

“We’re not going to stop. We’re for Erik and for his family. He needs to rest and were trying to make that happen. But we can’t just stay stuck here with nothing happening,” said Julie Josuns, a member of Erik’s Army.

Erik Cross was just 16 years old when he was murdered in Vicksburg, Michigan in 1983 and no one has been brought to justice.

“It’s just absolutely deplorable that nothing’s ever been resolved that nobody’s ever been arrested, that there’s no justice for this kid - this 16-year-old kid who was walking home from a party,” said Jolene Danoski, a member of Erik’s Army.

A group of people known as “Erik’s Army” has been collecting recyclables to raise money for Erik’s billboards, posters, flyers, you name it.

“Pop cans, pop bottles and turning ‘em in and that’s how most of the money.. and there was a Plum Fund,” said another member, Dorothy Meachum.

“You know, nobody can do everything but everybody can do something and that’s what we’re finding with the Erik’s Army,” said Danoski.

And in Edwardsburg on Wednesday, their 5th billboard went up.

“That is quite an accomplishment for us we have talked about that for a very long time. Those represent many many many hours of efforts to get those up and were very proud of them,” said Josuns.

And these women say they’re in it until justice is served.

“There’s several of us that will tell you that we’re in it for the long run,” said Danoski.

There are hundreds in the Facebook group “Justice for Erik Stirling Cross”. If you have any information on the case, you can contact Eriks Army on the group page or call the silent observer at 269-343-2100.