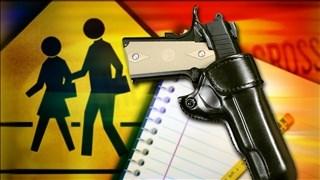 Police say a juvenile student was found to be in possession of a handgun at Pierre Moran Middle School Monday.

According to police, the principal of Pierre Moran Middle School was notified of a student possibly being in possession of a handgun at approximately 11:15 a.m.

The principal then notified an off duty police officer who was working security at the school at that time.

Upon bringing the accused student to the office, police say the principal and off duty officer found the student to indeed be in possession of a handgun.

Officials say the gun was in such poor condition that it did not appear to be functional. There were also no bullets in the gun or in the student's possession.

The 14-year-old male juvenile is currently being held in the Elkhart County Juvenile Detention Facility.

This incident is still being investigated by police.