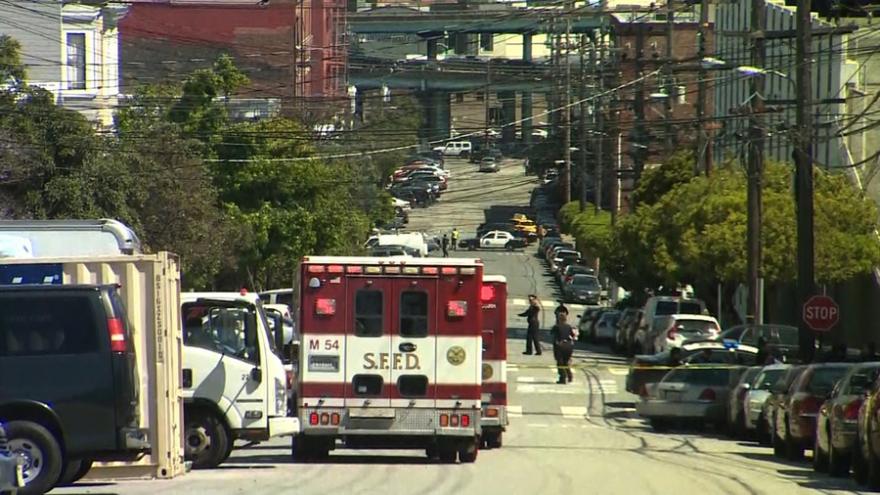 Two other people were shot and survived, he said. The gunman fatally shot himself when confronted by police, authorities said.

Police responded to a report of an active shooter around 8:55 a.m. local time (11:55 a.m. ET) at the UPS San Francisco Customer Center, a couple of blocks east of Franklin Square. The package sorting and delivery facility employs 350 people.

Officers arrived to learn the suspect was still inside the building, Chaplin said. A police "contact team" soon found him armed with an assault pistol, the assistant chief said.

"The suspect put the gun to his head and immediately discharged the weapon," he said.

UPS spokesman Steve Gaut released a statement saying that six employees were involved in a "shooting incident" but that the company cannot provide any identifications until the police investigation is complete.

Chaplin said that although the suspect was wearing a UPS uniform, investigators have yet to confirm he was an employee.

There is no indication the shooting was terror-related, Chaplain said without providing a motive. More information should be available during a 2 p.m. (5 p.m. ET) briefing.

The San Francisco police have contained the incident and secured the building, and its special operations unit continues to search the building for victims and witnesses, the department said in a tweet.

A woman named Michelle, who did not want to provide her last name, was walking to work across the street from a UPS facility when she saw several UPS employees running down the street. They told her to run because there had been a shooting, she told CNN, explaining she ran about a block with the workers.

"I was confused. They crossed the street and when they got to me, they said, 'Run, there is a shooter,' so I started to run with them," she said. "Several of them said it was a driver they worked with who had a gun and opened fire. I feel terrible for the people hurt and for the UPS team that was there but survived."

Antonio Salic told CNN he was working in a house across from the UPS building when he heard shots fired.

"I peeked out the window," he said. "I saw people getting out (of the building), and they were wounded. A lot of people were running."

The construction worker said he also saw people on the roof with their hands up, letting police know they were unarmed.

"Police approached and they were taken to a safe place," he said.

In its statement, UPS said the company wasn't immediately sure of the status of the survivors who were taken to the hospital.

"The company is saddened and deeply concerned about affected employees, family members and the community we share," the statement said.

The site of the shooting is the Potrero Hill area, a largely residential neighborhood. The shooting was also not far from a Whole Foods market and the brewery that makes Anchor Steam beer.

Residents have been warned to avoid the area because of heavy law enforcement activity. Authorities say they will hold a briefing soon.