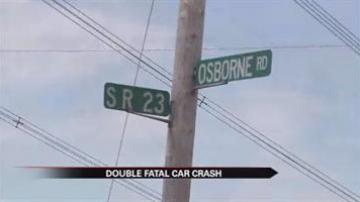 Evidence shows Jeremy Lawton, a 34-year-old South Bend man was heading north on SR 23 when he tried to pass another northbound vehicle, but instead hit a vehicle head-on, driven by 69-year-old Jim Menges of Walkerton.

Sgt. Bill Redman with the St. Joseph County Sheriff's Department said, "Lawton did not have a valid driver's licenses and his record shows 11 total suspensions, several DUI arrests, and had no insurance in the accidents."

Terrie Menges said her husband Jim was retired, but worked at University Park Mall for the past couple of years. That's where she said her husband was returning from when his vehicle was struck.

Terrie and Jim were married for 47 years and would have celebrated their 48th year of marriage on August 20. Jim graduated from Purdue University and held a master degree in Shakespeare from Ball State University. Terri and Jim have three children and two grandchildren.

Terrie Menges said Walkerton police officers who she personally knows came to her house late Saturday evening to inform her about her husband's death. They told her that Jeremy  Lawton had been drinking. She said, "This is a double tragedy, and he (Lawton) has family, and they have to go through this also."

"It is ironic to me that I serve in jails and in prisons, and I am constantly working with people who have issues with drug and alcohol issues. My goal is to help them," said Menges.

She described her husband Jim as her best friend and said, "Each man has a time to die, and this was my husband's time, and I'm okay with that, even though I miss him greatly."

Sgt. Redman said, he could not confirm nor deny that Lawton had been drinking, but he could tell ABC 57 News that toxicology tests on both drivers is a standard procedure in fatal accidents. Toxicology reports are not back in this traffic accident as of yet.