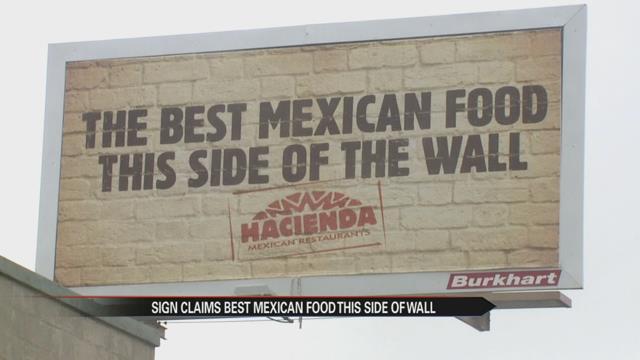 Billboards in South Bend, Elkhart, Goshen, and all around the Michiana area read that Hacienda Mexican Restaurants are "the best Mexican food on this side of the wall."

Some people aren't too pleased by it.  Dominique Bonilla is one of the many people that took to social media to voice her concern about this ad campaign.  Her video and pictures have over nine thousand views. She says it has angered a lot of people.

Hacienda is known for their colorful ad campaigns; campaigns that Bonilla used to enjoy reading. But this time, she feels they went too far.

Others disagree.  Hacienda's unique ads are known for their humor and for pushing the limits.  Aaron Allen, a South Bend resident, says that he doesn't think it's a big deal.  He thought it was comical, and wasn't the only one.

"I've got a lot of Hispanic friends, and I've asked them, and they all think it's funny," says Allen.

And that was the intent behind the campaign, says Jeff Leslie, Executive Vice President of Hacienda Mexican Restaurant. "It's never our intent to offend anybody," says Leslie. "But we know we take a little bit of a risk when we use humor.  And this political reference, this very topical reference, is something that's obviously in the media everyday and has been for months and months."

Humor is a major factor in brainstorming for their ad campaigns.  Many would say it's part of Hacienda's branding.

Bonilla says they need to be more careful.  She adds, "I understand that sometimes with slogans and what not there's an intended humor... but there are some things that shouldn't be joked around with."

Allen says that "there are always people that are going to be upset."  He adds that "people interpret things in a way they way to."

Leslie says that the ad was not taking a political stance, and he is open to talking to anyone would like to speak with him about it.