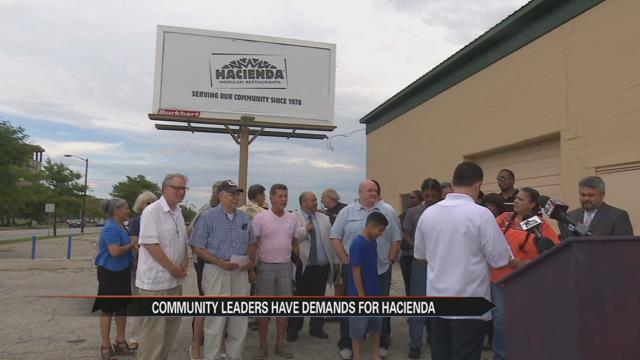 The battle over billboards ended Friday.

South Bend’s Hispanic community teamed up with other communities to ask for more from the company.

One demand included the firing of the marketing company behind the ad.

But really they’re looking to sit down with reps from Hacienda to bring conversations of cultural competency to the table.

“You know what I see is hurt right now, so that’s what I think about it so even though I saw them change the sign, it didn’t make me feel any better about it,” said Sam Centellas, Executive Director at La Casa de Amistad.

The previous tongue and cheek billboard left many with bad tastes in their mouths.

“I don’t normally take a lot of things personal but this one I did, because it was not only an attack on me it was an attack on our folks,” said Rivera.

Folks including city officials spoke out asking more to be done.

“Some of it is for change at hacienda but it’s also community wide,” Centellas.

The community was challenged Friday to use the momentum from this controversy to support local Hispanic eateries.

“Support local, eat local and do something in your life that will create unity and not division,” said Centellas.