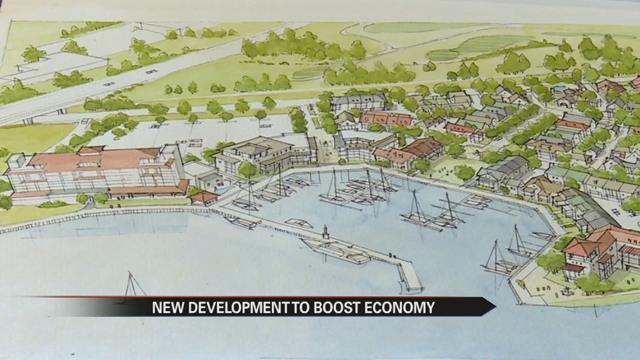 Harbor Shores is continuing to strengthen Berrien County’s economy by adding a new neighborhood in the Twin Cities.

“Harbor Shores really is one of the strongest anchors to our economy,” Berrien County Cornerstone Alliance President Rob Cleveland said.

Harbor Shores is getting stronger; announcing last Friday that construction of a new neighborhood – its seventh in seven years – is underway. It will be called Harbor Village.

Wright said the new neighborhood will be the “crown jewel” of the Berrien County waterfront community.

Harbor Village will sit right next to the Inn at Harbor Shores.

It’s a prime piece of real estate; positioned right where the St. Joe and Paw Paw rivers meet. And it’s only a short walk away from downtown St. Joe and the Benton Harbor Arts District.

“The diversity of the amenities that we have here is a huge aspect,” Cleveland said. “I talk about it all around the country when I’m out visiting with real estate executives and site consultants.”

Cleveland said Harbor Shores is not only beneficial to its residents, but to the local economy.

About 80 percent of the homes currently built in the six existing neighborhoods are already sold out.

“You can have the job for them. You can have it be in a place they want to live and play. But if you don’t have a place for them actually to live, you’re missing that piece of the puzzle,” Cleveland said.

Wright said model homes at Harbor Village are expected to be built by spring, and Harbor Shores will start taking reservations then.