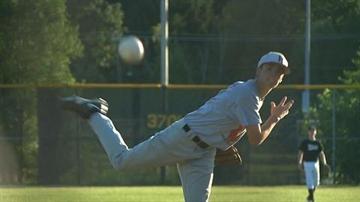 The dream of 14 young men from Granger to return to the Babe Ruth World Series Tournament became a reality the moment they won the Ohio Valley Regional competition earlier this summer. It will be their second trip to the tournament in three years.

Many of them have played for the Harris Township Babe Ruth Little League for years, and getting to the tournament is a great reward for their hard work. “It was just fun going out there being able to play on a great field like that in front of tons of people,” said Tyler Perry, the teams catcher and a player since he was nine years old.

Perry has played the catcher position for all but three innings over the 13 games the team played this year. His play was crucial in a game late in the Regional tournament.

With bases loaded and only one out, an infield chopper was hit toward first. His teammates threw home where he forced the out and rifled a shot back to first where the second baseman was in position to get the final out.

The team manager, Brian Lares, admits having the infield play shallow was a gutsy call. But his faith in his players and a strong knowledge of the odds made him confident. That trust is shared by players with each other.

Many of the teammates have played together for years, building friendships as well as solid game mechanics. “Our team is just fantastic… I’m friends with everybody, and our teams just my family I guess,” said Austin Toth, a long time team member.

With about a week to go before the team heads to Jamestown, New York, for the tournament the coaches are working them hard. Their philosophy; work hard in practice and the games will be easy.

Starting at 7:00 p.m. the teenagers are putting in three hours of practice a night. The first is dedicated to batting practice, followed by two hours of fielding.

Every player practices multiple positions. With just 14 players, the team never knows when a player will go down with an injury and another will be needed to fill in at the last minute.

Lares recalled a game where he was only able to field nine of his players due to injuries. At least four of those players had never played the position he put them into. He credits their winning of that game to the player’s ability to adapt and their training regimen.

The Harris Township team will play its first tournament game on Saturday, August 20. They will play three more games over the following three days.

If their record is good enough they will make it into the elimination rounds, where they will play for a chance to make it to the championship.