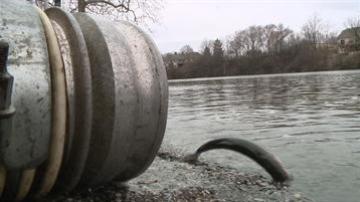 MISHAWAKA, Ind. -- Workers with the Bodine State Fish Hatchery in Mishawaka released hundreds of thousands of steelhead trout into the St. Joseph River this week.

"It's time for them to go," Dave Meuninck, Property Manager at the Bodine State Fish Hatchery, said. "The river is warming up, and we need room for small fish inside to come out."

Workers transported more than a 150,000 fish from the Mishawaka facility to the St. Joe River this week. The trout are little more than a year old, and only measure six to seven inches long.

Some won't make it.

Still, their survival rates here are better than anything in nature.

"Sixty to 70 percent of the eggs we started with are surviving," Meuninck said. "Where in the wild, you're talking single digit percentages to this life stage. Probably less than one percent coming back as an adult."

Fishing is a $7 million industry in Michiana, but more than the cash flow, is the ecological benefit they bring to area streams and rivers.

"We're helping to keep a delicate balance between predator and prey in check," Meuninck said.

This fish prevent invasive species like the alefish from ruining beaches and water habitats.

But until that struggle, it's down the drain and into the river, where in three to four years, they'll return to the same location to do spawning of their own.

"When the fish are ready to bite, they'll bite," George VanOodeghem said.

When that day comes, he'll be waiting. He's been reeling them in for years, enjoying a journey of his own.

"We've got a long wait to wait for those fish," VanOodeghem laughs. "But at least we know they're in there growing, and someday, we're going to have fun with them."