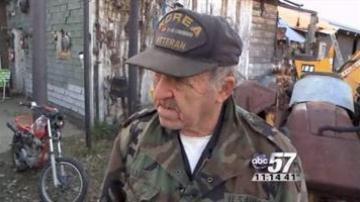 The junkyard on Roosevelt Road has attracted late night thrill seekers for eight years now. The pitch black road at night offers the perfect backdrop for the acres of old items along the side of the dirt road.

"Two old TV sets used to be turned on 24 hours, making the deserted place appear that it was "haunted," explained the owner's grandson.

Austin Ellenberger, a senior at Penn High School admits to driving by the junkyard a few times late at night, "Me and my friends heard the rumors about Kelly Road and we decided to drive down the road and see what he would do."

The owner of the property, Richard Hein, is becoming the attraction. What started as a "haunted" attraction has quickly become a prank to get a rise out of Hein and his family.

"We heard him yell something at us, like get away and he came out and threw a concrete block and tried to hit my car," Ellenberger recalls.

Hein admits that he is frustrated over all the traffic down his road with people gawking and vandalizing his property.

"They should all be arrested," Hein said.

Hein complained about fireworks getting shot off into his yard, and even at times, gunshots breaking out he windows of some of the items he has for sale. He also takes offense at his property being called a junkyard.

"This is not a junkyard! This is a museum," Hein corrected when I asked him about the rumors that his property was haunted.

Hein has taken photos of hundreds of cars, wrote down license plate numbers, and on dozens of occasions called the sheriff's office. He said he wished that the cops would do more to stop the flow of cars, especially on Friday and Saturday nights.

Neighbors weighed in saying that they felt sorry for the man and that he doesn't deserve the kind of trouble that is happening.

"I just can't figure out what they're doing. What are they doing to this neighborhood?" Hein questioned.

For the kids, it's nothing more than a good time. The more that Hein and his son and grandson react, the more talk it stirs up, and the more the teens want to go check it out for themselves to see what he will do next.

"I think he needs to lighten up because we're driving on a public road. We're not going on his property. We're just driving past him," Ellenberger said.

Ellenberger also stressed that he and his friends have only drove by the house three times and never caused any vandalism to the property or harm to those who work there.