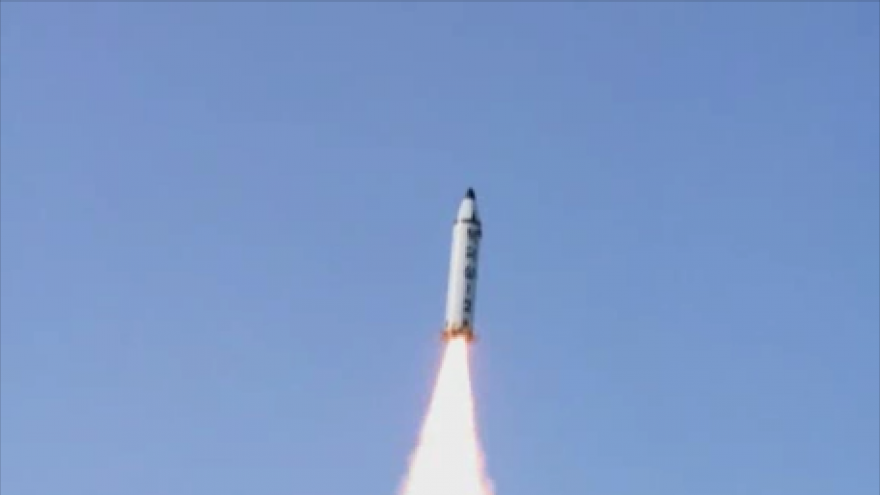 (CNN) -- Mitsuko Heidtke shakes her head in disbelief after hearing that Hawaii is now the first US state to prepare for the possibility of a nuclear strike by North Korea. She lives on the island of Oahu now, but 72 years ago she was in Hiroshima, Japan.

Heidtke says she was 10 years old when she experienced firsthand the utter devastation and the terrible consequences a nuclear bomb can deliver. She is disturbed to learn that there is even a remote possibility of going through anything like that again in her lifetime.

But growing tensions between the United States and North Korea over North Korea's weapons program have led Hawaii to take action.

"I saw the flash. I have never seen anything that bright. Then I saw the mushroom cloud," Heidtke said.

She got off the train and witnessed the worst scenes of her life.

"It was so terrible. People were running away with their skin hanging from their bones and burned."

More than 70 years later, the threat of a nuclear strike is being assessed and planned for just in case, although US officials dialed back rhetoric on Wednesday.

No matter how remote the chance, Hawaii is getting prepared, just in case. State and military officials know there will be little time to react if North Korea does launch a nuclear warhead aimed at Hawaii. The state has been working on updating preparations for some seven months, long before the heightened rhetoric of this week.

"If North Korea uses an intercontinental ballistic missile, from launch to impact (in Hawaii) is approximately 20 minutes," said Lt. Col. Charles Anthony, director of public affairs for the state's Department of Defense.

"Pacific Command would take about fives minutes to characterize a launch, where the missile is going, which means the population would have about 15 minutes to take shelter," said Vern Miyagi, administrator for Hawaii's Emergency Management Agency. "It's not much time at all. But it is enough time to give yourself a chance to survive."

Hawaii is working on how to warn its 1.4 million residents.

Officials have set a target date in November to test the outdoor attack warning sirens. The plan is to sound the sirens after the other emergency tone that is currently used. That one, which warns of natural disasters, is triggered on the first business day of the month at 11:45 a.m.

That attack warning siren test will be triggered from inside the 6-feet-thick concrete walls of a civil defense bunker nestled under the rock and dirt of the Diamond Head volcano crater.

Turns out there are many perils in paradise. Normally, the people working around the clock inside are keeping their eyes on the many natural disasters that can strike Hawaii: hurricanes, tsunamis, earthquake activity in the region, volcanic activity or flooding. North Korea is now very much on the list of things to watch.

"We want people to simply have a plan in place just like they would for a hurricane, tsunami, or any other disaster." Miyagi said. But he is keenly aware that getting people to be prepared takes a lot of cajoling and constant reminding.

Hawaii has a much larger comprehensive emergency plan in motion. Each part is still being worked on. One of the most important parts is educating the public. Pamphlets are being revamped. A warning system for cellphones is being created. Now, people are being told to have 14 days of emergency supplies in their homes, rather than the seven that can suffice in case of a hurricane or other natural disaster.

Nuclear attack could be similar to Hiroshima

The current information that military and emergency management officials in Hawaii have is that North Korea likely possesses a nuclear device very similar in strength to what the United States military dropped on Hiroshima. It would be devastating. Those in proximity to the impact site would surely die, along with anything else in the blast path.

Hundreds of thousands of people across the Hawaiian Islands would survive the initial blast, meaning residents need to know how to keep themselves alive until help arrives.

"We are hearing two trains of thought from our community," said Miyagi, a retired Army major general who served at US Pacific Command. "People either say, 'Why bother preparing? We will all be wiped out,' or they say 'Why prepare for a nuclear attack (that) will never happen?'"

Miyagi said: "It is the nuclear fallout that could end up killing people after the initial impact, unless people know what to do."

The message is simple: Take shelter immediately after a warning is issued.

"You can't take time to call your wife, your kids, your husband to pick them up and try to find a shelter," Miyagi said. "There is no time for that."

How to survive a nuclear attack

The best option is to find a fallout shelter. For decades, after the end of the Cold War, those shelters were pretty much ignored. Now Hawaii is looking at how they might fund restocking them. With the population boom since the 1980s there are not enough shelters in Hawaii to house everyone; whole neighborhoods are without even a single shelter.

Emergency management officials say there are other good options to avoid the radioactive fallout:

-- Be aware of your surroundings and options.

-- An underground concrete basement is ideal.

-- If you're in a car near buildings, get out and go to the middle of a concrete building away from windows and doors.

-- If there are only residences, go to the interior

-- If you are on the beach with no chance of getting to a structure, look for a cave.

"You should have 14 days' worth of emergency supplies," Miyagi said. Not everyone will need supplies for that long, but that will give time for the radiation to dissipate.

How Hawaii's tourists and residents are reacting

"This is concerning," Arthur said. "I'm prepared with food and water, but I don't know what exactly I am supposed to do if an attack siren is sounded. Most people here don't. We should."

Steven Villasenor was taking an evening stroll enjoying his vacation from Los Angeles in the warm, breezy Waikiki Beach weather. Villasenor said he has a plan for earthquakes, which happen in his hometown, but as far as a nuclear strike in Hawaii, he's uncertain of what to do and where to go.

"I don't really know what we would do. Probably stay in our room. Hopefully, cooler heads will prevail," he said.

People are usually not that fatalistic, so preparation is the best course.

"We don't want to scare people. They should not panic, but they should prepare," Miyagi said. The state of Hawaii is doing the same.

Mitsuko Heidtke never thought she would have to think about another nuclear attack. She searched for days for her mother near ground zero and never found her. That scenario played out with many of the mothers from her neighborhood who were volunteering in town that day. She has one message to world leaders and anyone who will listen.

"This kind of bomb should never be used, never ever again."