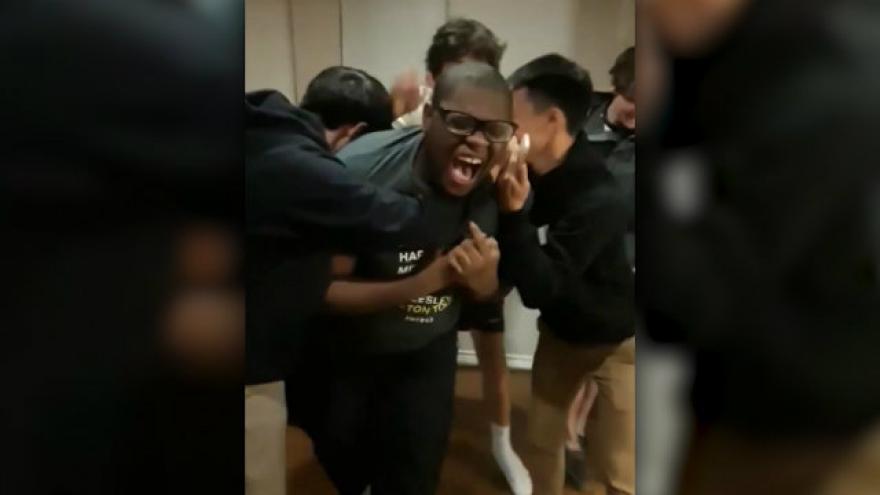 Michael Brown applied to 20 of the best universities in the US. He was admitted to every single one with a full ride and $260,000 in additional scholarship offers. Photo courtesy Berthinia Rutledge-Brown

By Isabella Gomez and Christina Zdanowicz

(CNN) -- Micheal Brown stared at the acceptance letter in front of him: It said yes.

So did the next one. And the one after that.

The 17-year-old from Houston applied to 20 of the best universities in the US. He was admitted to every single one with a full ride and $260,000 in additional scholarship offers.

"It's something I'm proud of because I see my hard work paying off, determination paying off, sacrifices paying off," the student told CNN.

Of those 20, he listed his top eight choices as: Harvard, Princeton, Northwestern, Yale, University of Pennsylvania, Stanford, Georgetown and Vanderbilt.

Currently a senior at Mirabeau B. Lamar High School, Micheal has been heavily involved in his school's debate team, mock trial and student government for years. He has also volunteered for political campaigns, citing his interest to "the moment I saw Barack Obama get elected."

He is set on majoring in political science, but is also considering a second degree in economics.

When he received his first acceptance in December, he chose to do it at a friend's house to relieve the pressure of being around his whole family.

"My family had high expectations and maybe didn't realize how competitive the process is," he said.

But he still invited his biggest supporter to come along -- his mom.

Berthinia Rutledge-Brown filmed as Micheal stood in shock by the computer while his friends excitedly rallied around him.

"After sixth grade, Mike was in control of his education," recalled the proud mom. "He was focused, he knew what he wanted and he made his own decisions."

Rutledge-Brown lost three babies before becoming pregnant with Micheal. Once she finally had a son, she poured all of her energy into giving him the very best that she possibly could.

He only received one B during his entire academic career, which she said was very difficult for the goal-getter.

On March 28, Micheal opened the last four admissions decisions that would mark his 20-school streak.

His mom, who works two jobs as a licensed chemical dependency counselor, took the afternoon off to be with him.

They are both still in shock about the college and scholarship offers.

Urging others to dream big

But he didn't want to talk about his own accomplishments alone.

"For me, it's important to highlight that I'm not the only student of color who is achieving," the teenager noted.

He has met countless friends through organizations like QuestBridge, Emerge Fellowship and Breakthrough Collaborative, which match students from low-income communities with higher education opportunities.

In fact, Micheal has at least one friend at every single Ivy League school thanks to these initiatives. He stressed the importance of using his platform to show other kids that they can dream big, too.

"I want people to be informed and get access to these same programs," he said.

The high achiever will spend the next 30 days touring additional schools before he makes his final choice on May 1.

And he's not taking a break until the fall.

This summer, he'll spend two weeks traveling around cities that have historically fought for racial justice as part of Rustic Pathways' "Race in America" program.