Health Department warns about the dangers of blue-green algae 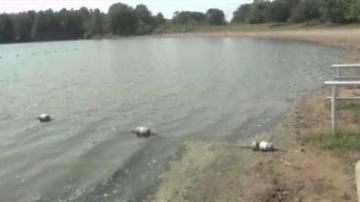 NORTH LIBERTY, Ind. -- The Indiana State Department of Health is warning Hoosiers about the dangers of blue-green algae, also known as Cyanobacteria, in Indiana lakes. Two dogs recently died after taking a swim in Walbash County.

So what does this mean for you and your pets for your Labor Day plans?

We took a closer look at the murky issue.

The Indiana Department of Environmental Management, Worster Lake at Potato Creek State Park is under a high alert for blue-green algae levels.

DNR Naturalist Tim Cordell, with Potato Creek State Park says, the name blue-green algae is deceiving, "It's not even an algae, it's a bacteria." Cordell said you can't see blue-green algae, but if you were to fill up a glass with the lake water, the water would have a slight blueish green color due to the Cyanobacteria.

The Indiana State Department of Health's warns you to take precautionary measures including avoiding contact with visible algae and swallowing water while swimming. Also recommended is to take a bath or shower with warm, soapy water after coming in contact with untreated water in ponds or lakes.

The website states, "Pets should not be allowed to swim in or drink untreated water from these sources". However, the dog beach at Potato Creek State Park is currently open and that confuses Portage camper Sharon Riley who is camping at the park with her husband and their 13-year-old dog. "We were hoping to take her (their dog) down to the water to get a drink and I'm glad you (ABC 57's Judi Lykowski) mentioned it because we weren't aware of it," said Riley.

Cordell said warnings are posted on a wall as beech goers head in to use the bathrooms. It's about a block away from the beech, but Riley doesn't think that's good enough when you are gambling with her dog's life. She said, "My concern is over the weekend now because it is like the last camping weekend of the season and there will be a lot of people here with their pets."

The Indiana Department of Environmental Management (IDEM) began sampling the week of June 18Th. The World Health Organization (WHO) uses a guideline level of greater of 100,000 cells/ml are considered a high count alert. According to the August 21st numbers, Worster Lake at Potato Creek State Park had a count of 880,000 cells/ml.

We spoke to Cindi Wagner, the Indiana Department of Environmental Management's Chief of the targeted monitoring section of Office of Water Quality, she said there is no scientific way to know if the Cyanobacteria in any lake is toxin. She also said the blue-green algae grows best in warm stagnant water and if Tropical Storm Issac brings rain to our area this holiday weekend, it could break up the count levels.

ABC 57 also asked her what the Cyanobacteria levels were in the Salamonie Reservoir, where two dogs died on Sunday July 15th after playing in the water. Wagnor said IDEM does not monitor Cyanobacteria levels in the particular areas where the dogs were at playing that day.