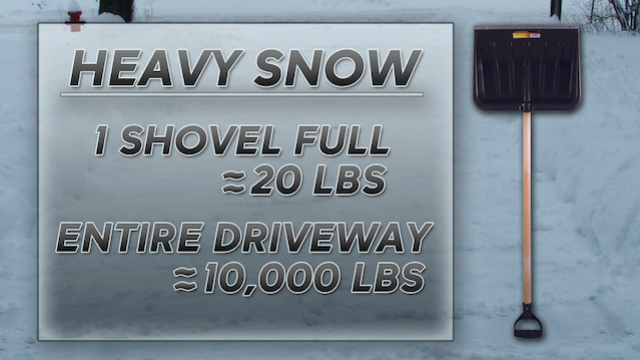 While many are traveling through the conditions, some residents are starting to dig their way out .

Semis and drivers starting to get back on the road.

But many are home starting the taxing process of digging out of the back breaking snow.

"We've been out since 7 a.m.," says plow driver Jason Jones.

Plow drivers like Jones are trying to stay ahead of the accumulating snow.

Michiana remains under a winter storm warning with near white out conditions from South Bend to Plymouth.

While crews are trying to keep roads safe, residents are starting to dig out under the wet and heavy snow.

Plymouth resident Tim Collins not only shovels his sidewalk but his neighbors, as well.

"Yeah, I try to shovel that too. I found out today she's not coming home today. It breaks my heart. I just try to keep it clear for people to come and go," says Collins.

Collins says he's only out there on average about 30 minutes so the shoveling doesn't effect him too much.

But what if you own a driveway?

Remarkably, with one foot of snow, one shovel full equals 20 pounds.

"I think you're going to go in increments. Whether heavy or light. That's what I would recommend,” says Dustin Roe with Beacon Health Systems.

And Roe’s recommendations for proper shoveling?

"Just like anything when you're lifting, lift with your legs and not your back. And if you are feeling fatigued at all just go in and relax, go back out there again,” says Roe.