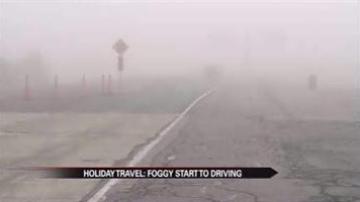 SOUTH BEND, Ind. -- On one of the busies travel days of the year, thick fog caused flight cancellations and delays at the South Bend Regional Airport and slowed traffic on the toll road with visibility of just a tenth of a mile.

"The visibility is just above zero, which means airplanes can't come and go right now so it's a difficult day,” said Mike Daigle, Executive Director of the South Bend Regional Airport.

Flights out of South Bend and Chicago were canceled or delayed.

Some passengers had to take a bus to a connecting flight in Chicago. Others were stuck and just had to try to pass the time until the fog cleared.

"Playing games on my phone, getting something to eat, walking around,” said traveler Taylor Keegan.

On the toll road, visibility was just a tenth of a mile.

"It's thick! You've got to pay attention all the time. We're stopping here just to give my eyes a break a little bit through the fog,” said Scott Gabbert.

"When we left Iowa it was bad and it's been pretty steady all the way to here,” said driver Jim Mildenberger.

Flights out of South Bend resumed around 11 a.m.

The fog finally dissipated around 1 p.m.