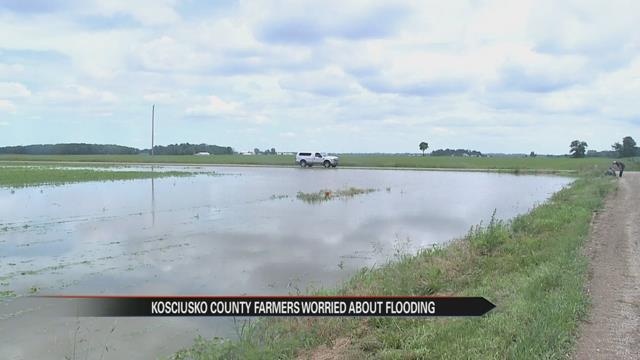 Local farmers are beginning to feel the impact of heavy rainfall.

“We've had almost five and half inches of rain since I believe last Thursday, so that's a lot to deal with,” said Tom Farms Manager Kip Tom.

Evidence of more than a week's worth of rainfall can be seen across parts of Kosciusko County.

“If you look behind me, where that water is going, those crops are going to die,” Tom said.

And he said the impact of wet soil doesn't end with dead crops.

It affects his entire production of seed corn, soy beans, and corn.

“Excessive water is a real detriment to corn production in particular,” he said.

When soil is wet, Tom is unable to treat crops with nutrients or rid his fields of weeds and disease.

Just down the street another farmer, Rusty Hollar, worked to salvage his soy beans and corn.

“Some of our corn is starting to go downhill because of wet weather,” Hollar said.

Hollar said with this much water his crops wouldn't need more rain until mid-July.

Farmers said rain shouldn't have an impact on your wallet.

They said consumers shouldn't worry about prices going up.
Share this article: