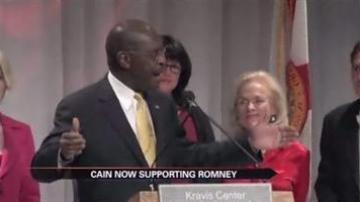 Herman Cain is once again making political headlines, but this time it's for being a flip-flopper.

Just months after Herman Cain announced his support for Newt Gingrich, he's taking it back. Monday he told a Washington radio station, he will now support presumptive nominee Mitt Romney.

Cain said it was time for Gingrich to get out of the race because "he doesn't have a shot."