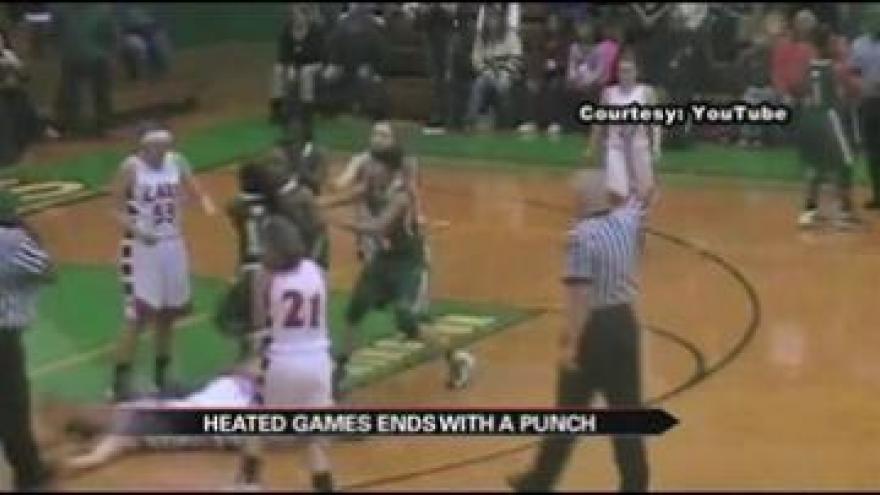 SOUTH BEND, Ind.-- A fight broke out at the end of the Oregon-Davis and Washington High School girls basketball game Saturday night. One player threw a punch, and the other was taken to the hospital for a mild concussion.

With just seconds left in the game, Oregon-Davis' Lexi Minix was dribbling down the court when she was fouled. She pushed Breondra Green, Green hit Minix in the face and she fell to the floor.

Green was ejected and suspended for the next ghame.

By Sunday morning the YouTube video of the punch had been viewed by thousands of people.

Washington High School Head Coach Mo Scott said what you see in the video is only a part of the story.

"When she got ejected, I approached the floor to check on the kids and see if she was okay, but the coaches were upset and screaming. I told the coaches to calm down because we needed to control the situation so it didn't get out of hand," said Scott.

According to Scott, Minix and Green had been fouling each other throughout the game, and he said he believes they both should have been ejected in an incident you don’t see online.

Greg Briles, the superintendent at Oregon-Davis said Lexi Minix might have a minor concussion.

Coach Minix, also Lexi's father, declined to comment about her condition on Sunday.

Before the game, Washington High School retired Skylar Diggins' jersey and honored her success as a player at Notre Dame.

Diggins was upset about the fight and according to social media reports she yelled at the referees.

Diggins later took to Twitter to say she protects her family "unapologetically."

Scott said Diggins was not kicked out of the game.

“She did not get thrown out of the game or anything like that. Once the game is over it’s common practice to get her out of there before she gets bombarded," said Scott.

Briles said their team was "classy" in how they handled the situation.

“I’m proud of the manner in which our players handled the situation. They huddled up as a team. They did not approach anybody and they stayed in a huddle. At this particular time criminal charges will not be pressed," said Briles.

Briles and Scott both agree that this will be a huge teaching lesson for the players.

"It’s very unfortunate that a punch was thrown. If you’re in the situation the Coach Minix was, it was his own daughter. He was very upset. He did approach the South Bend Washington coach and he was pretty adamant about it. I don’t fault him for that," said Briles.