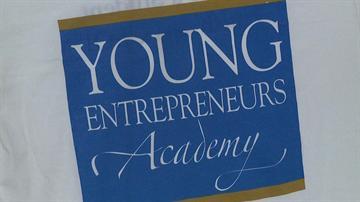 ELKHART, Ind. - Standing up before a group of investors to pitch a new start-up business can be terrifying for even the most seasoned business person, but on Wednesday a group of Elkhart high school students proved they were up to the challenged.

The Elkhart chapter of the Young Entrepreneurs Academy (Y.E.A.) is the first Y.E.A. group in Indiana.  The program guides students in the process of planning and creating their own businesses.  On Wednesday night 11 students in the program pitched their idea to a group of eight local business people to convince them to invest real money in their business plans.

Porter said he planned to be a business major in college and wanted to join to Y.E.A to help get him off to a good start.

“You’re listening to your friends saying, ‘Oh, I got a job at McDonald’s or I got a job here at Ryan’s,” Porter described.  “Then they ask you where you’re working and it’s like, I don’t work, I actually own my own company.”

Among Porter’s competition was freshman Christian Sarber who, along with his partner, formed a non-profit company aimed at partnering with hotels to reuse discarded soap bars.  For every bar purchased one would be donated to a homeless shelter.

“So what we’re going to do is we’re going to repossess them and sanitize them so they’re nice and new and there are no freaks with germs,” Sarber explained.  “We’ll redistribute them out to the homeless community.”

Fighting off their nervousness, the eleven students pitched their ideas.  The experience is designed to build their entrepreneurial experience and give them a start in business.

“The kids are getting it now, they’re starting now and they’re getting it and they’re just going to grow as they get older,” described Kathy Cardwell with the Greater Elkhart Chamber of Commerce.

Jeffery Porter said the experience pitching to the investors was valuable.

“Going into that later on I’ll feel a lot more confident, I know there’s some things I could work on about giving speeches to others,” Porter described. “I’m a little bit more prepared for it.”

The investors ended up making $5,600 in investments, Porter and Sarber’s businesses each received $700.

The top business, Peak Leather Company, run by Christian Peak received $1,100 and Peak will be moving on to a national competition in Rochester, New York.