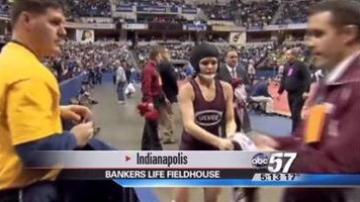 INDIANAPOLIS, Ind. – Wrestling history was made in Indy.

A teenage girl wrestled her way to becoming the first female to compete at the state wrestling championship.

Fifteen-year-old Kayla Miracle, a sophomore at Culver Academy, literally fought her way to the finals. Miracle lost in a unanimous decision in the first round Friday night.

The finals were held at Bankers Life Fieldhouse. The teen said she's still excited about making history, and she's not giving up.

Miracle has her sights set on the 2016 Olympics.