Hillary Clinton speaks at AM General 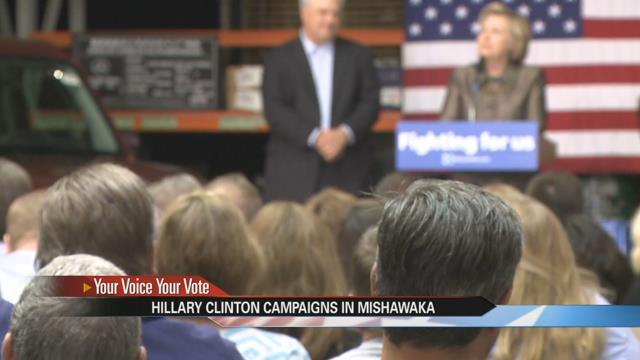 All eyes are on Michiana as presidential candidate Hillary Clinton campaigns in Mishawaka.

Hoosier issues are now center stage as we’re just a week away from Indiana’s primary election.

The former secretary rallied at Mishawaka’s AM General plant.

And for many, her acknowledgment of Michiana’s growth and development was a nod that this state is finally on the nation’s radar.

“Typically Indiana is just a fly over state and it’s really nice to have some type of relevance to this campaign and to be a part of the discussion,” said Chris Lovejoy, an employee at AM General.

The economic growth of Indiana was a major discussion for Clinton.

AM General earned her praise as she campaigned for an industrial renaissance, one that would mirror the Mishawaka plant’s success.

“Together you have proven that we can make it in America and not only that export to the rest of the world,” said Clinton during her speech.

This company benefits from a great deal of success now thanks to years of turnaround efforts.

“There has been growth, we are manufacturing more and more cars,” said Lovejoy.

Her speech in front of an intimate crowd garnered support from local leaders.

“It was spot on and it gave me a lot of confidence that she’s going to be a great president for a place like South Bend,” said South Bend Mayor Pete Buttigieg.

While outside the event her visit drew mixed reactions.

“I am against the corruption in American politics, said James Dewitt, Elkhart resident.

“We just want her to know we’ve got the Millennials behind her, we’re here for Hillary,” said Channing Foster, Notre Dame student.

Indiana’s primary election is one week away so many expect more attention to be on the Hoosier state.

“Whether you’re for Hillary or someone else, it’s just really nice to be a part of the campaign,” said Lovejoy.