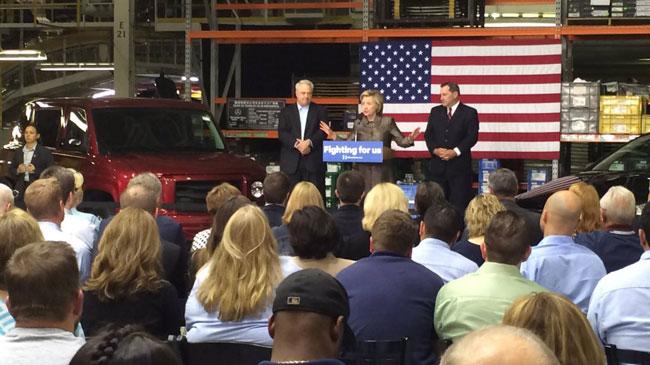 Hillary Clinton toured AM General, then spoke to employees about her plan for America. She spoke for about 10 minutes about the importance of the auto industry and skilled labor.

Clinton's plane landed in Elkhart just before 6 and her motorcade took her to the AM General plant on McKinley Highway.

Senator Joe Donnelly introduced Clinton at 6:20 p.m. She spoke for about 15 minutes.

Clinton said the growth of AM General was proof American businesses can compete anywhere.

She praised the MV-1.

"What a remarkable invention, providing dignity, mobility to people with disabilities," Clinton said.

She said it was important to support organized labor and the skilled workers unions represent.

"I am going to do everything I can to unify the country," Clinton said.

AM General's production of its world-class hummers was hit hard in the great recession - causing mass layoffs and the threat of closing down permanently.

But the company pivoted and began producing a one-of-a-kind handicap accessible vehicle called the MV-1 - and secured a multi-year contract with Mercedes-Benz in 2015 - to build the R-class for sale in China.

MAYOR ENCOURAGES ALL CANDIDATES TO VISIT

Although Clinton is the first major candidate to visit the Princess City this year, Mishawaka Mayor Dave Wood says he wants all candidates of either party to show up.

He says with the area's history in manufacturing, especially of vehicles, it makes sense for Clinton to visit and others to follow.

"AM General's got a great tradition here over decades and this area has a tradition of well over a century of automobile manufacturing and so when you think about world  class vehicles, AM General is close to the top of the list on that," said Wood.