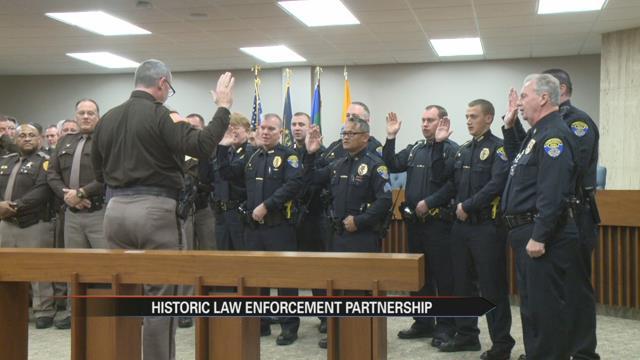 St. Joseph county law enforcement are getting a little help.

10 new officers with the Pokagon Band of tribal police have been sworn in with 35 St. Joseph County deputies.

"These are common agreements that's done throughout the United States whenever there is tribal land close to another jurisdiction," said John P. Warren, tribal chairman of the Pokagon Band of Potawatomi Indians.

This new effort will allow county and tribal police to enforce laws in each other's backyards.

The move is inspired by Berrien County law enforcement, who saw success with a similar agreement in Michigan.

"It's been great," said Berrien County Sheriff Paul Bailey. "They're our backup, we're their backup. I don't have to put another deputy down there. We count on one another."

"Adding more police officers to our department or to south bend or Mishawaka really isn't feasible right now," said Michael Grzegorek, St. Joseph county Sheriff.  "Adding another dozen and a half officers assists us and is a benefit for the entire community."