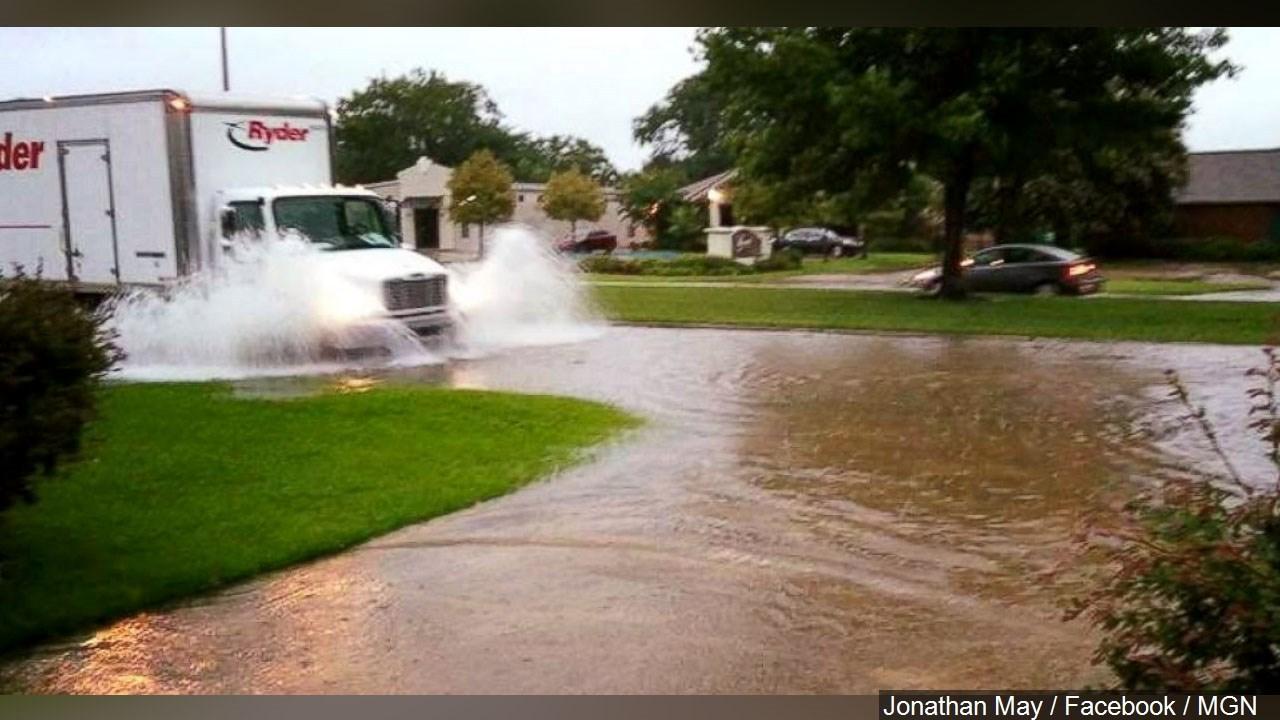 The disaster has forced rescues of more than 7,000 people so far, said Gov. John Bel Edwards at a news conference Sunday. Three deaths have been blamed on the floods, he said, and a fourth person is unaccounted for.

Although the storms that caused the flooding have moved to the west, another 2 to 4 inches of rain was expected Sunday in and around Baton Rouge. Rivers such as the Comite near East Baton Rouge and the Tickfaw near Livingston were expected to keep rising until Monday.

On Sunday in the town of Galvez-Lake near the Amite River, a frantic Christy Bourgeois and her husband Tom were preparing to use a fan boat to race to a nearby flooded home.

"The last I heard my sister was there and it was on fire," she said.

Elsewhere in the area, victims were salvaging toys, clothes and other belongings from their flooded homes. Down Highway 431, desperate families, including pets, gathered at a gas station waiting for the water at their homes to recede. Their pickup trucks were loaded with belongings they were able to save before the flood came.

Not far away, Jeremy Best said he and Henri Dufrane had brought their small boat from nearby Wallace and used it to help 30-40 people escape their flooded houses.

"It's coming up fast, man," said Best, who was wearing little more than shorts and a pair of boat shoes. "And it's only going to get worse."

Edwards said he had made an official request Sunday for aid from FEMA and expected to get an OK for that very soon.

More than 24 inches of rain have fallen since Wednesday in Livingston, near Baton Rouge, making the disaster an extremely rare weather event, according to the National Weather Service. The statistical chance of such flooding occurring in any given year is 1%, the weather service said.

Deaths blamed on the floods include a 30-year-old woman whose body was recovered Saturday afternoon in St. Helena Parish, police said. The woman, who wasn't identified, was traveling with her husband and mother when their vehicle was swept away by the flood. Her mother and husband were rescued.

Police said they believe another victim  Samuel Muse, 54, of Greensburg -- died Friday after he tried to drive through high water and floodwaters swept his vehicle off the road, CNN-affiliate WAFB reported.

Also Friday a 68-year-old man drowned when he slipped and fell in flood waters in East Baton Rouge Parish.

The thousands of rescues include three men in a boat who came up on a woman's nearly submerged car and struggled to pull her out as the car filled with water.

"We're coming, we're coming," one of the men says. They try to smash the car's passenger side window.

"Please help me," the woman said.

One man asks for a knife to cut the cloth roof of the car  which was a convertible  and hops on the vehicle's trunk, which juts into the air as the car quickly sinks.

As the car starts to float away under his weight, the man jumps into the water, frantically ripping at the soft top to no avail; then he reached in the car's driver-side window, trying to reach the victim.

Just when it looked like she was lost, the woman stuck her arms out of the water toward him. He got a good hold and pulled her to safety.

She popped up through the water and announced they needed to rescue one more victim.

"I can't get the dog," he said, as he felt inside the submerged convertible.

He ducked under the water to reach into the car.

"Maybe she's gone," said one of the men in the boat.

"No  she better not be," the woman said, her voice strained.

The rescuer reemerged and exhorted: "I got your dog."

He held up the small, white dog, turned to the victim and in an exhausted but happy voice said, "Swim for the boat."

Ray Cutrer told CNN that the flood seemed to come out of nowhere. His daughter, whom he had moved next door to two years ago, believed they might get a bit of water in the house but didn't fear a deluge.

"Our guard was down," he said. "And then it was a matter of just watching the water continually rise."

By midnight Friday they were storing furniture and other valuables in the attic and carrying what they could over the back property line as water continued to fill the road.

Saturday, when they returned, Cutrer found his house had escaped damage but his daughter's was devastated.
She and her husband will be living with him and his wife until repairs are done, he said, while another washed-out neighbor is staying with Cutrer's brother.

"We're just keeping them right here in the neighborhood, and we are all going to be working right here with them, cleaning it out," Cutrer said. "That is the way we can give back to this community."

He added, "I promised God when I saw my house didn't have any water in it, I said, 'Lord, I will be here to help the ones who did,' and I am. I will be right here. We'll help them every way that we can."

He said the fire department had to rescue neighbors by boat.

The governor has deployed the Louisiana National Guard, which said Sunday it has mobilized about 1,700 soldiers to assist in search and rescue. That number is expected to increase to 2,000 and perhaps even 2,500, officials said. Military police also will be provided to help local law enforcement with security.

In Livingston Saturday, the sheriff's office was forced to move its 911 communications center to another building -- because the center was taking on water, the parish sheriff's office said.

Louisiana State University in Baton Rouge announced that the school was closed Saturday. It said in tweets that campus streets were impacted by water.

"Please stay away from campus if possible," the school tweeted. LSU "Football Fan Day and Media Day" on Sunday were canceled.