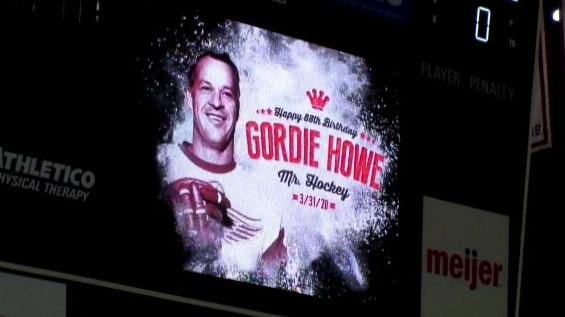 "Thoughts and prayers to the Howe family as Gordie Howe passes away at the age of 88," the Detroit Red Wings tweeted Friday.

As a six-time league MVP, Howe arguably was one of the sport's greatest players, scoring 801 goals in his 26 years in two different stints in the National Hockey League. In 1963, he became the NHL's all-time leading scorer, a record that was later broken by Wayne Gretzky. By the time he retired, Howe also would own league records in assists, points and games played. To this day, Howe still holds the records for most games (1,767) and seasons.

Howe signed his first professional contract in 1946 with the Detroit Red Wings, where he spent 25 years and won four Stanley Cups. In 1971, Howe announced his retirement and was inducted into the Hockey Hall of Fame a year later. But just two years after hanging up his skates, Howe returned, playing for the Houston Aeros of the World Hockey Association. Remarkably, he played with his sons, Marty and Mark.

In 1980, Howe retired for the second time at age 52. But he still wasn't done. Seventeen years later, Howe put on his skates one more time when he played for the IHL's Detroit Vipers.

Beyond his reputation as a prolific scorer, Howe was many things. He was feared and revered, famous for his flying elbows. But perhaps, biggest of all, he was an iconic name that a casual and non-hockey fan would know.