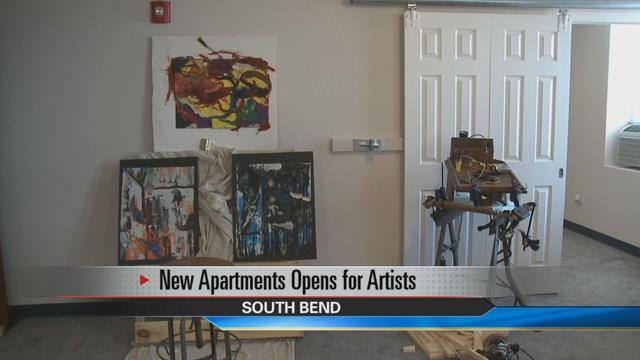 Both South Bend artists and city leaders are celebrating the opening of the Hoffman Hotel Artists Apartments.

It’s a big move for the creative community, and an even bigger move for downtown development.

The building is in a section of the city developers are working tirelessly to revitalize.

Performer Elliot Lorenc is one of those artists.

“A community with artists who do similar things to the art that I do  is very interesting to me,” Lorenc said, after moving into his artist apartment Wednesday.

Lorenc joins a community of artists living for low rent in the old Hoffman Hotel building.

“It’s important for the culture of South Bend to be able to foster the art scene rather than prohibit it,” Lorenc said.

Not only did the artist apartments have its grand opening Wednesday, but earlier this week restrictions were lifted on street performers,

“I’m going to probably go out in the next couple of weeks and start performing,” Lorenc said.

Those streets he’ll be performing on are somewhat of a blank canvas for city leaders.

“We’re standing in an area where the river, the central business district, and some of our great parks and neighborhoods all come together,” Mayor Pete Buttigieg said at the building opening.

Buttigieg has been pushing for revitalization of downtown South Bend for years.

He says the Hoffman Hotel is just the beginning of a complete picture developers hope will come together right next to the river.

This is a very promising early proof of concept and there’s going to be more where this came from,” Buttigieg said.

While the artists may paint portraits instead of blueprints, their work, and the trendy new space they live in  are the first steps in a whole new dance for the historical downtown area.