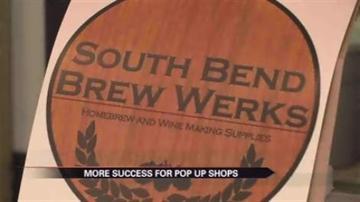 SOUTH BEND, Ind. – This holiday season eight “pop up” shops opened in downtown South Bend. One of the businesses was so successful they signed a lease and will stick around – and possibly expand.

"There were 8 different shops among 5 locations for two months, from the first Friday of November and they just closed last Saturday,” said Tamara Nicholl-Smith, Director of Downtown South Bend Business Recruitment.

Nicholl-Smith is happy to announce that one plans to stay here for good.

"South Bend Brew Werks will remain a permanent fixture in downtown and this is the third year the program has been attractive and successful at retaining a business,” said Nicholl-Smith.

Last year Made in Michiana decided to stay put.

"We've had foot traffic since the day we opened,” said Char Renbarger, one of the 5 owners of Made in Michiana.

That's what happened for the South Bend Brew Werks. It specializes in selling kits to get you brewing your own beer or wine at home.

Sanderson says the owner of the State Theater and four local investors are awaiting the city's approval to allow an actual brewery to be built there.

"We can start with construction and get the permitting for all types of things and the state excise to get the brewery up and  running,” said Sanderson.

Andrew Elegante, 1 of the 4 investors said the brewery will have a limited menu at first, but their goal is to be up and running this spring.