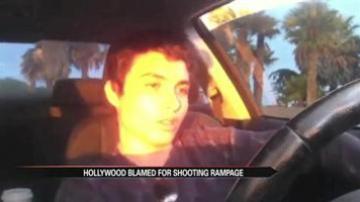 A troubled young man killed six and hurt 13 in a shooting rampage last week. Thursday a critic is saying Hollywood may be to blame.

The suspect Elliot Rodgers was the son of a Hollywood director.

Last week he carried out his plan to kill, causing terror among those at Santa Barbara College.

A critic from the Washington Post believes the attacks were tied to his life as a director's son growing up on the fringes of Hollywood.

"Rodger's rampage may be a function of his own profound distress, but it also shows how a sexist movie monoculture can be toxic for women and men alike," said the Washington Post's Ann Hornaday. "He had created this video on YouTube that seemed to be such a product of the entertainment industry, that he did grow up in literally, and also just as a member of the culture."

Hollywood disagrees. Artists have been tweeting the critic, saying that movies are not to blame for the rampage.