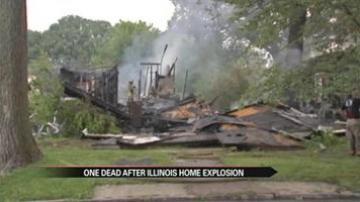 Sky-view images show what little is left of the home.

The victim is an 82-year-old woman.

The force of the explosion blew out windows and doors and burned the house to the ground.

The woman's son was inside the home at the time.

He was in a back room and tried to help his mom but was not able to get to her in time.

"I tried to make it to where my mother was, asleep in her bed.  I just couldn't get there. The whole roof had collapsed on top of her," says son Tim Davison.

Fire crews were still on the scene nearly eight hours later.
Officials are still looking into what caused the blast!
Share this article: