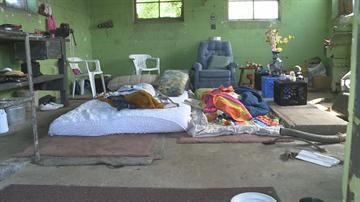 ABC 57 News followed up on a tip, Tuesday, that someone was living in an abandoned pump station near the corner of Water Street and 5th Street in Benton Harbor.

The building lies less than a block from Harbor Shores Golf Course and inside was a bed, clothes and several personal items.

“That doesn’t look like a day or two stay,” said Director of Public Safety Roger Lange. “It looks like they’ve been in there awhile.”

Lange said the building itself had been unused for several years.

According to at least one neighbor, the homeless person had been living in the pump station for about three months.

“You see they tore all this out of here,” said Davis. “I had locked the door.” Davis demonstrated how the building’s homeless residents broke the window to unlock the door.

“Homeless set up and take shelter wherever they can find it,” said Lange. “It could be illegal entry but for a homeless person we don’t normally go that route. If anything we try to seek help for them.”

According to police, the building will be secured until someone comes forward to pick up their belongings.