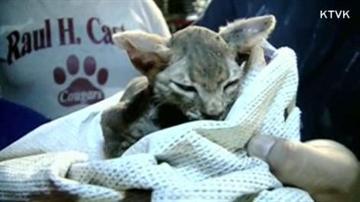 PHOENIX -- Neighbors and loved ones feared the worst after a homeowner entered his burning house. Witnesses said he went in to rescue a pet cat, while his daughter said he went to make sure everyone else got outside safely.

Either way -- a team of Phoenix firefighters rushed into the house to find him, using thermal imaging cameras.

But they had to leave when conditions became too dangerous.

About 20 minutes later, the homeowner resurfaced, greeted by cheers and tears of joy.

Loved ones said he escaped through the back of the home.

And in tow -- the rescued cat.

The cat was later treated for its injuries and will be fine.

A firefighter said it was very dangerous for them to go in after the homeowner, but the good thing is that he made it out alive.