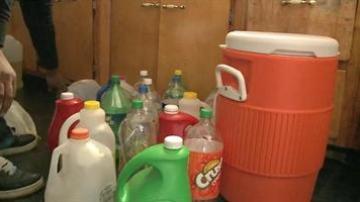 BENTON HARBOR, Mich. -- A Benton Harbor homeowner says she has been without water for a week and no one at the city will help her.

Diana Brady has been without water for a week. She has two children and cares for her elderly father, who she had to move because of the lack of water.

"We have not been showering, I have just been going to get water from people from homes that will give me water to try to keep my toilet and things going," said Brady.

Her house is filled with buckets of water to help them get by.

To get the situation fixed, she first needs her water to be turned off.

"I'm requesting to get my water shut off so we can resolve the issue down there but they won't do it," said Brady.

She has made calls for the past week and went to all the right places but still has no answer to her problem.

We called the supervisor, but there was no answer and no way to leave a voice mail.

We then went to the water department. We were not allowed inside to talk to anyone and they were too busy to help.

We asked an employee who we could contact since we couldn't reach the supervisor and couldn't leave a message.

"I'm trying to get my work done so I can do whatever, so why don't you call the city manager, maybe he can help you," said an employee at the water department.

We also reached out to the city manager, but have not heard back.