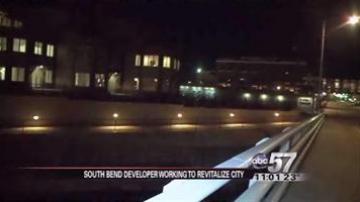 SOUTH BEND, IND. -- A young entrepeneur and South Bend native is trying to show Indiana residents what downtown South Bend has to offer. He is currently finishing his third set of luxury town homes in the area and they are already sold out.

When Dave Matthews finished college at Purdue, he had one goal in mind, to come home to South Bend and help revitalize the downtown area.

"To have south bend do well means i can give folks and my friends from other areas to either move back or to have more peers move together or create a new active community", said Developer Dave Matthews.
The Adams High School graduate started development projects across South Bend, one being the East Bank project, a group of luxury town homes overlooking the St. Joseph River in downtown.  The goal of these town homes was not only to make money, but to bring business to downtown restaurants.

"At least three of the tables at the time were all occupied by folks that i had built homes for and now were living two blocks away", said Matthews.

But this has not been an easy feat for Matthews.

"I looked at this same land but i couldn't make anything pencil out or work financially", said Matthews.

Thanks to a public private partnership between Matthews and the city of South Bend.  The development of the town homes got the green light the city incentivized home ownership by reducing the land cost and these luxurious town homes were built.  But Matthews is not stopping there.

"We have ten new ones going up on Niles Avenue over by the Emporium restaurant", said Matthews

He plans on changing the way people view downtown South Bend one block at a time.