Hot summer across the country 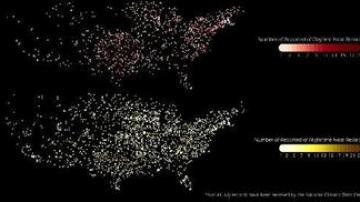 It has been a hot summer across the country!  And, July especially was HOT!  Check out this awesome image from the NOAA Environmental Visualization Laboratory!  Cool name, right?  And they have some awesome information in an easy to see and understand manner!

The image below represents records tied or broken from across the country last month.  The red/pink colored map were daytime records, and the lower map with yellow coloring represents nighttime records!

Here is more detailed information from NOAA about this image and the climate data it represents:

"Almost 9,000 daily records were broken or tied last month, including 2,755 highest maximum temperatures and 6,171 highest minimum temperatures (i.e., nighttime records). It should be noted that the tally of records collected so far is not complete – more are expected to come in as station data from across the U.S. is mailed to the National Climatic Data Center. The statistics reported here only include weather stations with real-time electronic reporting, which accounts for about two-thirds of the locations. Final numbers should be available later in August.

This image plots how many times a heat record was broken or tied in a given location. Some cities reached daily high temperatures 19 out of the 31 days in the month. The largest concentration of these records occur in the southern Plains, Midwest, and Northeast U.S., which were gripped by a series of heat waves pushing heat indices well into the 100’s (Fahrenheit) for many days at a time."

How cool!  My thanks to NOAA for this info!  If you would like to learn more, here is the website: http://www.nnvl.noaa.gov/

And, it looks like we will be seeing some cooler weather here in Michiana by the middle of next week!  High temperatures could be topping out in the 70s!  What a change from the hot month of July!