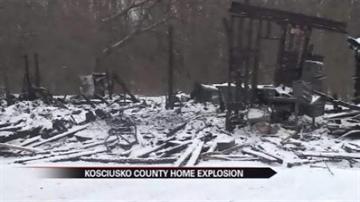 ETNA GREEN, Ind. -- A Kosciusko County man watched his home explode just seconds after stepping outside to turn off the gas.

It happened in the small town of Etna Green just outside Warsaw around 10 a.m. Wednesday morning.

Firefighters say they could see the smoke three miles away and residents say they heard the explosion even farther away than that.

"Literally one minute its all there and five minutes later everything you own is gone. Just think about what that does to your life," said Mentone Fire Chief Mike Yazel Thursday.

That is now the reality for one Kosciusko County man after his stove started leaking gas Wednesday morning.

"The homeowner said he heard hissing from the kitchen. He went in the kitchen and smelled gas, the stove was hissing," said Yazel.

The resident decided to walk outside and shut off the main gas line going into the house, but he never made it to the switch. Just seconds after stepping outside, the house exploded right in front of him.

By sheer fate or luck, he walked away with nothing more than some singed arm hair.

"He's a lucky man. He is a real lucky man, there's no question about that," said Yazel.

Although the damage is too great to know exactly what sparked the explosion, firefighters say there are a couple things that could have caused it.

"It could have been a pilot light on the stove. When he opened the door it could have changed the the air mixture enough to make it volatile or the furnace could have come on [when the cold air came through the front door] and caused it to blow," said Yazel.

If you ever smell gas in your home, get out of the house and then call 911.

Firefighters say to never use your cell phone or even a land line where you think there might be a gas leak because it can actually trigger an explosion.

As for that homeowner, he is getting some much needed help from the area Red Cross.