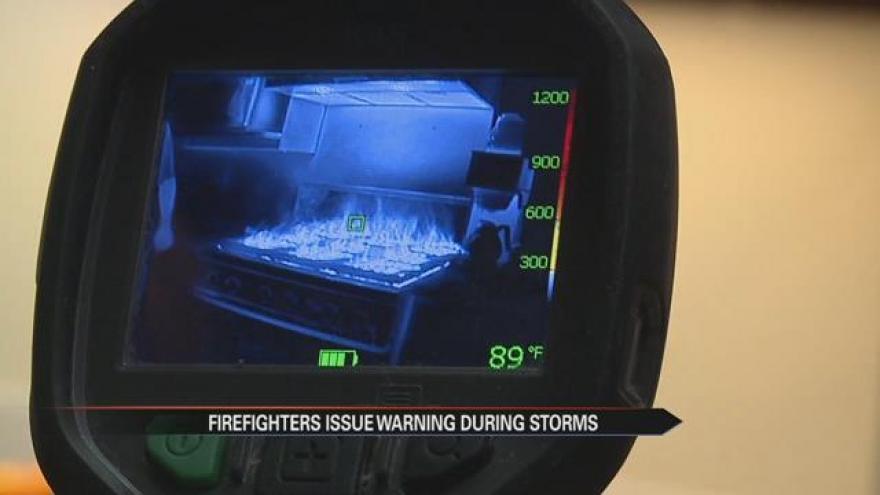 Early this morning crews fought a house fire on Inwood Road in Osceola.

The Penn Township Fire Department says the fire was caused by a bolt of lightning that struck the home Saturday night around 11:30, two hours later the home was engulfed in flames. With more lightening expected through the weekend, the department is reminding homeowners of how they can stay safe.

“Unfortunately this incident could have been prevented. The resident said around 11:30 it sounded like two freight trains collided,” says Battalion Chief Brian Kazmierzak.

Chief Kazmierzak says the homeowner told the department she smelled a little smoke but because she didn’t see any flames, she thought everything was ok.

Opening the windows to circulate the air through her home perpetuated the fire, according to Chief Kazmierzak.

“It’s going to sit and smolder so it’s going to find insulation something in the wall and it’ll start very small and then grow as the wind whips and gets to it,” says Chief Kazmierzak.

At the first sign of trouble, Chief Kazmierzak says to dial 911.

The department also released the following information in a press release:

Penn Fire would like to remind everyone that if you ever smell smoke or suspect your house has been struck by lightning or is having an electrical problem to IMMEDIATELY call the fire department.  We would rather it be nothing and leave you with a piece of mind knowing we investigated the problem, then for you to wait until it is too late and the fire has already taken over the house.  Also the absolute worst thing you can do is to leave doors and windows open during a fire.

A fire needs air to survive, the more air that you give it, the faster the fire is going to grow.

Please remember the Fire Triangle – fire needs air, heat and fuel.  You can’t control the heat or fuel but you can control the air!