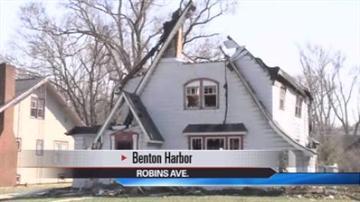 BENTON HARBOR, Mich. -- Early Sunday morning a Benton Harbor house caught fire and with the small Public Safety Department, many off-duty rescue workers and volunteers had to spring into action to help put out the flames. Fire fighters say that they got a call Sunday around 2:30 a.m. When they arrived flames were shooting through the roof of the house on Robins Avenue.   Because there was only one Benton Harbor full time fire fighter on duty, the ones who were off duty were called in to help out. Benton Harbor public safety officers and St. Joseph Township fire department were also on the scene. Fire fighters say it took them almost 6 hours to put the fire out. No one was injured in the fire, investigators are still looking into what caused it.