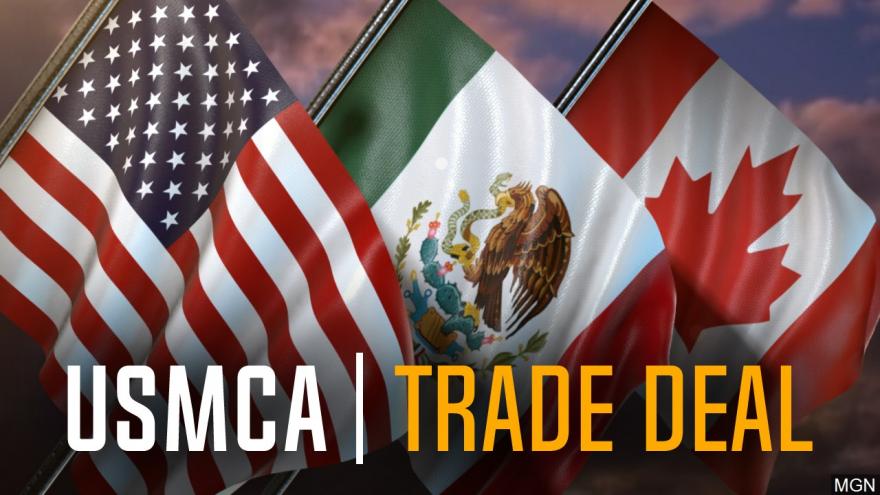 The legislation passed with a bipartisan show of support -- with a vote of 385 to 41 -- winning over even the most ardent trade skeptics like Democratic Rep. Rosa DeLauro of Connecticut, who was involved in negotiations with the White House and formally endorsed it on Thursday morning. Trump's trade deal moves one step closer to ratification after more than a year of negotiations between his administration and House Democrats.

The Republican-controlled Senate is expected to vote on the agreement in early 2020, only after Trump's impeachment trial concludes.

Trump, who has repeatedly berated the 1994 NAFTA as "our Country's worst Trade Deal," campaigned in 2016 on renegotiating the pact and signed the re-branded US-Mexico-Canada Agreement with his Canadian and Mexican counterparts about a year ago. Congressional Democrats pushed for additional labor standards to be added.

The deal for the most part keeps NAFTA intact. It now addresses digital trade, imposes stricter labor and environmental enforcement provisions, and also nudges open the Canadian dairy market to US farmers. It also requires more of a car's parts to be made in North America in order to remain free from tariffs.

But the impact on the overall economy will likely be moderate, according to an April report from the US International Trade Commission, a federal government agency. It found that the initial version of the USMCA would create 176,000 jobs after six years and increase the GDP by 0.35% -- an impact the agency described as "moderate." For comparison's sake, the US added 266,000 new jobs in November alone.

The report estimated that it would add 28,000 to the auto industry specifically -- a number that both the Trump administration and an industry group, which supports the USMCA, argued was too low. The administration's own report projected that the deal would create 76,000 auto jobs over five years. That would mean a more than 7% increase in employment over the current 990,000 US auto workers.

The boost comes from some new rules for auto trade. The USMCA requires 75% of a vehicle's parts to be made in one of the three countries -- up from the current 62.5% rule -- to remain tariff-free. It also requires more vehicle parts to be made by workers earning at least $16 an hour.

Before agreeing to take up the implementing legislation for the deal, congressional Democrats negotiated with US Trade Representative Robert Lighthizer for months behind closed doors for additional labor and environmental standards to be added, as well as more concrete enforcement mechanisms. Democrats, led by Ways and Means Chairman Richard Neal, also were able to kill a biologic drugs patent protection provision they argued put the interests of pharmaceutical companies over those of consumers.

The bill passed out of Neal's committee on Tuesday.

"The agreement that was originally sent to Congress was light-years away from what we're considering today," Democratic Rep. Mike Thompson of California, who was involved in the working group talks with Lighthizer, said at Tuesday's committee hearing.

Many Democrats argued that with the new changes, the USMCA is better than the original NAFTA. Even New Jersey Democratic Rep. Bill Pascrell, who voted against moving the agreement out of committee, said that some "progress" had been made.

But he took issue with the process and the notion of giving Trump an unnecessary victory.

"By moving forward on approving a new NAFTA in a bum's rush, the House is making clear that the fix was in from the start and is hastening the way for a White House victory party," Pascrell, one of Congress's most vocal opponents of the original NAFTA, said in a statement after the markup. "Everyone involved in this process, more or less, has worked hard for a positive outcome. And no one can question that we have made progress in this document, which is the direct result of us pushing so hard."

Other progressives took solace in the fact that the deal received a rare endorsement from the AFL-CIO, the largest federation of unions in the US. Labor groups applauded the changes Democrats secured in the pact, including an interagency committee that will monitor Mexico's labor reform implementation and compliance with labor obligations. It also, for the first time in any US trade agreement, allows for "rapid response" panels to review whether specific facilities are violating workers' rights and to levy duties or penalties on products made at those facilities.

Democrats also negotiated new measures that will make environmental regulations easier to enforce by doing away with a requirement to prove a violation affects trade. The deal provides $600 million to address environmental problems in the region, like sewage spillovers from Tijuana that impact San Diego.

Moderate Democrats, especially a number of freshmen from districts Trump won in 2016, have urged House Speaker Nancy Pelosi for several months to bring the agreement up for a vote by the end of the year. Democrats hope the vote will give members a policy outcome that is tangible for many Americans — and less divisive than impeachment — to talk about while they are home in their districts.

Flu has killed 39 children this season, but virus activity continues to decline