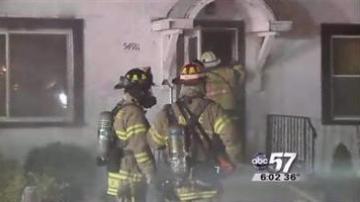 WARREN TWP., Ind. - Crews had to call in extra tankers to battle a house fire in Warren Township Tuesday morning.

The fire started around 4:30 on Quince Road, between Edison Road and Lincolnway West.

The road was closed for about an hour and a half as roughly ten trucks and engines lined the street for the box alarm fire.

Fire officials said there were no flames, but smoke was seen billowing out behind the home and there is significant smoke damage inside of the house.No one was hurt.

Neighbors told ABC 57 the woman who lived in the home died in January, but her son was supposed to start staying there Wednesday.

Officials on the scene said they would be back later in the morning to try and pinpoint the cause of the fire.