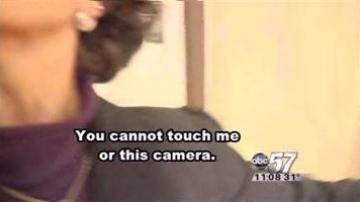 For several weeks, the board members have been meeting behind closed doors to discuss what to do next. Several employees have asked that Executive Director Marva Leonard-Dent be fired or, at the very least, be put on leave during the investigation.

This was the the first time the board has asked Leonard-Dent to attend a meeting, which is why ABC 57 News went to Thursday's meeting, to hear Leonard-Dent's side of the story.

In the last month, ABC 57 News has reached out to Leonard-Dent several times, including two occasions when we visited her home. However, both times, no one answered the door, even though there was someone was inside.

Thursday was no different, Leonard-Dent ignored all of our questions and refused to talk.

Several allegations of wrong-doing inside the Housing Authority have been popping up steadily since last month, when the first two workers came forward with claims they had been touched and talked to inappropriately by their boss Executive Director Marva Leonard-Dent.

Since the first two men came forward, filing police reports with the South Bend Police Department, employees have demanded that board members step in and take action against Leonard-Dent.

The employees who have come forward say they just want the board to put Leonard-Dent on leave during this investigation.

Since Leonard-Dent would not talk, nothing is known about why she was asked to attend the meeting or what transpired Thursday afternoon.