How the LAPD has changed since the 1992 riots 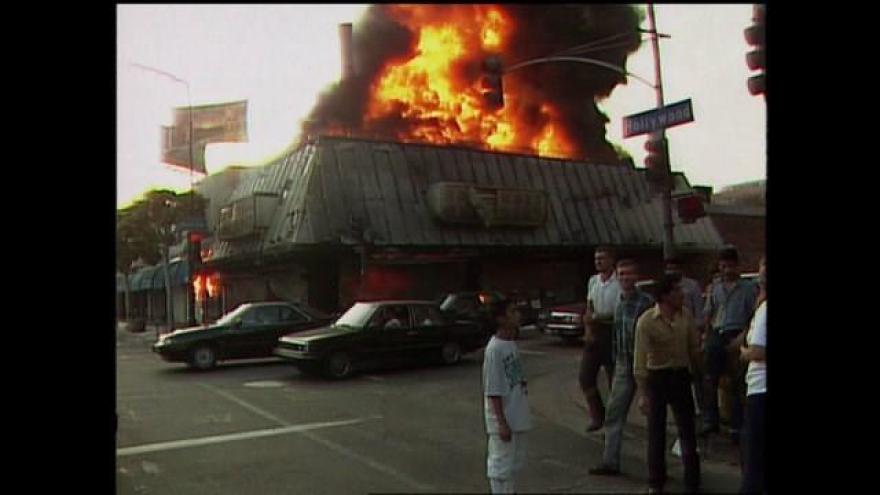 LOS ANGELES (CNN) -- The video was silent, but it spoke volumes: three white Los Angeles police officers, supervised by a sergeant, threw Rodney King to the ground, tased, kicked and stomped him, and battered him with batons 56 times.

More than 20 officers responded when the black motorist led police on a high-speed chase after he didn't pull over for allegedly speeding; 10 of them just stood around and watched as King was beaten. That moment, caught on video and broadcast on television screens around the country, exposed what black residents of Los Angeles had known for a long time: the LAPD was broken.

In March 1991, the month of King's arrest, the Los Angeles Police Department's job-approval rating cratered at 34%. When the officers involved in King's beating were acquitted on April 29, 1992, the city exploded in rioting ignited by the belief that its police force was abusive, racist and unaccountable.

Twenty-five years later, expert observers say the LAPD is a department transformed -- and that the change was made possible, in large part, by a consent decree, a police agreement with the federal government.

The future of similar agreements with 15 US cities -- including Ferguson, Missour; Cleveland and Baltimore -- was thrown into question this month when Attorney General Jeff Sessions placed all pending consent decrees under review.

"We're in a place I could have never imagined the LAPD 25 years ago," said Connie Rice, a civil rights attorney who used to regularly sue the department over its practices in minority communities. Today, she works with the LAPD as a consultant.

'Not your grandfather's LAPD'

Today's LAPD is hardly above reproach. The 2014 shooting of Ezell Ford, a mentally ill black man, by two officers in South LA sparked furious protests. The Police Commission found that one of the officers violated the department's policy on using deadly force in the shooting, but the Los Angeles District Attorney did not file charges in the case.

The department's efforts at transparency were also brought into question this week, as American Civil Liberties Union joined a lawsuit against LAPD over what they describe as a "systemic violation" of California's public records law. The suit accuses the agency of not responding to requests within the time frame mandated by the law or ignoring inquiries altogether.

But whatever its faults in 2017, longtime critics of the department say it's miles away from where it was in 1992.

"Are there still problems? Oh yeah," Rice said. "I can show you units that haven't gotten the memo, but now there real investigations. Now there is an inspector general. Now the police commission has some tools. It has some power. And the LAPD has accepted civilian rule."

"That's an entirely different scenario than the one we faced in the Rodney King days," Rice said. "This is not your grandfather's LAPD."

More than 60% of the department was white when residents rioted in 1992. Today, it's just over 30% white. The department publishes use of force and officer-involved-shooting details online, and 7,000 of its officers will be wearing body cameras by the end of next year. Arrest totals are no longer considered a measure of an officer's success, and engaging the community is the department's stated mandate.

"Their reputation has changed dramatically," said Christine Cole, executive director of the nonprofit Crime and Justice Institute, who co-authored a 2009 Harvard Kennedy School study on change within the LAPD since the riots. "They seem to be doing things excellently as it relates to constitutional policing and transparency."

Angelenos now trust the LAPD more than any other local institution, according to a Loyola Marymount University survey published this week: 58% of residents polled this year said the police would do the right thing "all of the time" or "most of the time."

What it took for the LAPD to change

In the week after the King tape first aired, city residents overwhelmingly said they believed police used excessive force in the arrest and that police brutality was commonplace, according to a Los Angeles Times poll. A majority thought King was beaten because he was black, and that police were generally tougher on blacks than others. Half of respondents didn't view the Los Angeles Police Department as being honest.

After the riots, the city's mayor commissioned an investigation into what caused them and what could be done to prevent the city from erupting again. The 228-page Christopher Commission Report found a pervasive pattern of excessive force by officers, and that the department did little to rein it in. It recommended that the city create a new civilian Inspector General to oversee all complaints of misconduct, and to audit the department's disciplinary system yearly.

The report also made public damning transcripts of conversations that officers were having with each other from computer terminals in patrol cars, displaying how pervasive casual racism was within the department. "Sounds like monkey slapping time," one message read. "Batten down the hatches, several thousand Zulus approaching from the north," said another.

The transcripts revealed that officers would use the shorthand NHI -- "No Human Involved" -- for crimes involving black victims and perpetrators, Rice recalled. They "showed the LAPD's racism, anti-Semitism, homophobia, misogyny, you name it," she said. "They had every-ism you could think of on steroids."

But the weight of negative public opinion wasn't enough to effect change. After Chief Daryl Gates stepped down in 1992, his successor found himself stymied, facing an institution not ready to accept reform and a lack of political will from the city.

It would take another nine years, a major corruption scandal and federal intervention before the city would see real change.

After more than 70 officers in the LAPD's Rampart Division were accused of a wide range of misconduct -- including planting evidence, making false arrests, selling drugs and unprovoked use of force -- the Justice Department gave the city two choices: face a major federal lawsuit, or enter into a formal consent decree.

What the consent decree did

In 2001 -- 10 years after the Rodney King beating and nine years after the officers who beat him were acquitted by an all-white suburban jury -- the LAPD began what Harvard researchers would later call "one of the most ambitious attempts at police reform ever attempted in an American city."

The consent decree finally implemented many of the recommendations that came out of the immediate aftermath of the LA riots: it instituted "discipline reports," created a database of information about officers and supervisors to identify at-risk behavior, revised procedures on search and arrest -- and even created a system to account for instances of police dogs biting members of the public.

"Many of the things recommended in the Christopher Report in '92 still basically were unfulfilled, because the city didn't finance it," said Bernard Parks, who became chief of police just before the Rampart scandal broke.

There were 187 paragraphs in the decree, and "each paragraph required a policy change," said Cole. "And the paragraphs had sub-paragraphs. The department had to show 94% compliance in each paragraph." Executing it all would cost this city hundreds of millions of dollars and take 12 years.

Once William Bratton became chief in 2002, he focused on implementing the reforms related to diversity in recruiting and promotions, discipline, use of force, transparency and community policing.

He created a unit within the department tasked exclusively on becoming compliant with each line of the decree.

"Previously, cops knew they could get away with anything, because the LAPD refused to indict any of its own," she said.

Lessons learned in the riots

The consent decree set out to address the deep institutional problems that gave rise to the fury of the riots.

In 1992, when forgotten parts of the city did get attention, it came in the form of military-style police raids targeting poor black and Latino neighborhoods. "They were destroying crack houses and there was a lot of collateral damage among people who were either arrested, detained, and in some cases abused who were on the fringes or had nothing to do with it whatsoever. You have a tense, tense situation," said Lou Cannon, journalist and author of "Official Negligence: How Rodney King and the Riots Changed Los Angeles and the LAPD."

The 2001 decree set strict guidelines for staffing in gang prevention units, required those units to work more closely with the community regularly, and made supervisors more directly accountable for arrests search warrant execution. Responsibility for the legitimacy of arrests now rested much more with the supervisors.

When rioters took to the streets in 1992, the police were astoundingly ill-prepared. Riot gear was stored in places they couldn't get to. Command centers didn't have communication equipment. They let the day-watch go home. While the city burned, police Chief Daryl Gates went to a fundraiser in the wealthy Brentwood neighborhood.

The police pulled out from the epicenter of the riots -- the intersection of Florence and Normandie in LA's South Central neighborhood -- and didn't come back.

The commander who ordered the retreat and the officers who fled didn't know the community, and the rioters didn't know them. The federal agreement mandated that the LAPD hold quarterly meetings in the neighborhoods they served. They were ordered to get to know the issues of concern from street to street, the dynamics of families and the languages spoken in the areas they patrolled.

Last year, the LAPD commissioned a study on bias in policing -- something Rice said it never would have done 25 years ago. It found that 73% of residents strongly or somewhat approve of the LAPD's work.

But the percentage of black people who disapproved was significantly higher, at 32%, than the rate among white people at 14%. The disparity disturbed the police commission, which vowed to continue looking into how to change it.

At the same time, the department is getting wide praise for its revised "Use of Force" policy announced this month. The new rules formally incorporate a concept called "de-escalation" into the LAPD's guide outlining how and when officers can use deadly force. Officers can now be judged specifically on whether they did all they could to reduce tensions before resorting to their firearms.

"This whole vision seemed crazy 25 years ago," Rice said. "You realize we were asking a bunch of macho men to be social workers with a badge and a gun -- you may as well have been asking them to be Rockettes."

"Now I am dancing with them," she said.