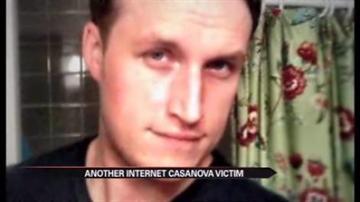 HOWARD COUNTY, Ind. – A woman in Howard County, near Kokomo, said she met Ray Holycross in September and he took off with her belongings, including a gun. Holycross was arrested Tuesday on a Howard County warrant.

Lindsay Wallsmith says she and Holycross were never in a relationship, but they met on a dating website.

After talking for about a month, she says they planned to meet in person.

Then after the meeting, Holycross’ brother was supposed to pick him up.

The brother never showed up.

Holycross asked to stay at her place, but one night turned into many.

She told him it was time to go and dropped him off at a bus station.

That’s when she discovered he stole an iPad, iPod and a gun.

"I would just hope that whoever he had contact with in the past is able to find peace. Not all people are like this. It's not their fault, he's a very good manipulator,” said Wallsmith.