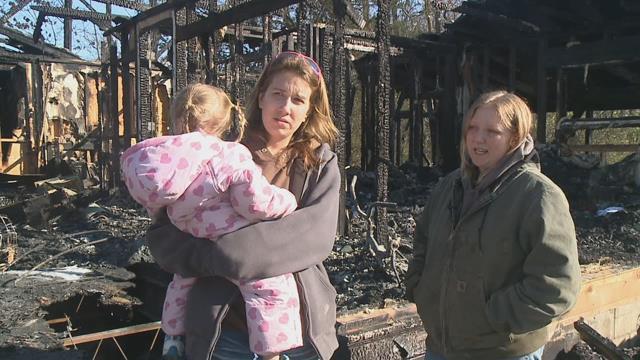 The Howard Township family whose house burned down less than one day after they finished moving into it are grateful they still have each other.

“We have family and that’s the main thing that we have right now,” Kourtni Biggs, who lost her new home in the fire, said. “Yes, we lost everything, but, we have our family.”

Biggs and her husband, Brandon, started moving into their new home on Terminal Street in Howard Township a few weeks ago with their three young children.

“And we just finished our last load on Saturday,” Biggs said. “It felt like home when we brought the stuff in.”

But less than 24 hours after completing their move, the Biggs’ home burned to the ground.

The first snowfall of the season had knocked out their power Saturday night, but when it was turned back on Sunday morning, the power surge triggered an electrical fire.

“We weren’t gonna [leave the house],” Biggs said. “We were gonna stay here. But, I mean, it was cold. You didn’t know when the electric was gonna come back on. So we just stayed at [a friend’s] house and we pretty much wake up in the morning to a phone call that our house is gone.”

The family spent the night at a close friend’s house, but now, that’s where they’re staying full time.

According to the family, the fire started in their living room when an outlet that was behind one of their couches sparked.

Though they’ve lost nearly everything, the family is trying to stay positive.

“We can still look at our kids and say we still have everything,” Biggs said.

Despite all the heartache, two pretty remarkable things happened Monday afternoon during the interview.

And then, one day after the fire, the family’s third cat that was still missing emerged from the rubble.

A couple small reminders that even through the darkest of times, things will be okay.

“You can lose everything but you’ll always have family,” Biggs said.

The Biggs family did not have insurance on their home – they were planning on going to get it Monday, before this all happened – so they are in need of everything.

You can donate money to the family at any Fifth Third Bank – just ask for it to be placed in Patricia Deboever’s account (Kourtni Biggs’ grandmother).

You can also drop donations of any kind off at the Moose Lodge in Niles or at the home the family is currently staying at, 1529 Michigan Street in Niles.

Though the family’s three cats have now been found alive and well, their American bulldog, Max, is still missing. He is white with black spots and has tags on. If you find him, you can bring him to the address listed above.