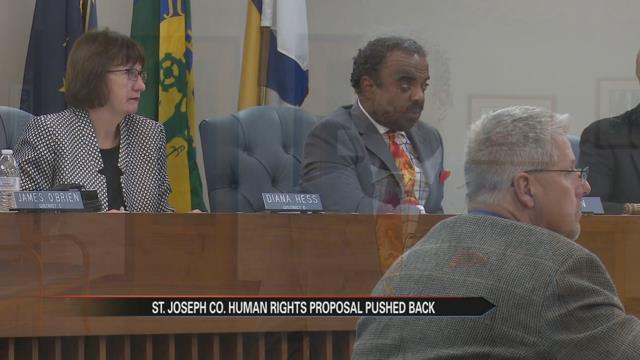 The hearing for the bill was initially scheduled for Tuesday.

And now county residents are hoping the council will revisit that conversation before the New Year.

“We would have to take a formal vote to decide if they’re going to come back out of committee to the full council for the December meeting,” said Rafael Morton, St. Joseph County Council President.

That proposal is now in limbo.

The ordinance has been talked about for months, but will now have to face another committee review before it goes in front of the public for discussion.

“There’s no guarantee because what we’re in the process of doing, we’re reviewing and taking in further consideration of different points of view and we’re talking about possible amendments,” said Morton.

But most left once it became clear a decision wouldn’t come at this meeting.

Michiana’s LGBT center sent out a statement in hopes the ordinance will be a priority for the council.

“We are confident that the council will resolve this matter and hear voices from the public soon,” said Eli WIliams, director of the center.

The council president agrees, saying the council wants to make sure the ordinance is handled correctly before a vote.

“We want to make sure that we’ve done our total due diligence and considered basically all of the information that we’ve been receiving from the community,” said Morton.