Hundreds flock to Susan B. Anthony's grave on Election Day 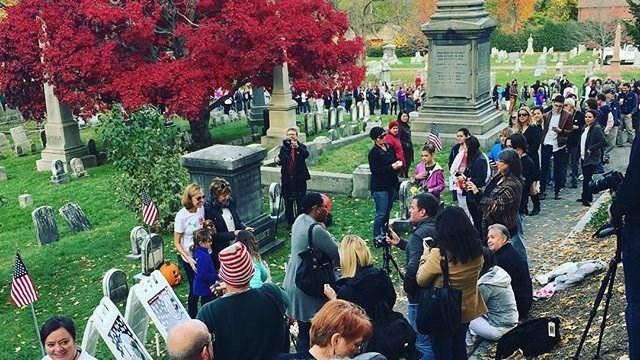 (CNN) -- Voters made an Election Day pilgrimage to Susan B. Anthony's gravesite in honor of the pioneering activist who fought for women's suffrage.

Since early voting commenced in October, voters have paid their respects to Anthony by decorating her tombstone with stickers.

The tributes came as Hillary Clinton accepted the Democratic presidential nomination this summer -- the first time in U.S. history a woman won such a nod from a major political party.

During the 19th century, Anthony was one of many reformers instrumental in pursuing the women's right to vote and was a tireless activist against slavery and for women's rights throughout her life.

In one well-known incident, in 1872, she was arrested for voting and was indicted. She was tried and fined but refused to pay the penalty, according to the Susan B. Anthony Museum & House website.

Anthony died in 1906, 14 years before the 19th Amendment to the Constitution was ratified. The measure -- also known as the Susan B. Anthony amendment --says citizens should not be denied the right to vote on the basis of sex.

The Rochester, New York gravesite has long been a hot destination during election season and is particularly popular on Election Day.

Because of the site's popularity, the cemetery will remain open until 9 p.m. Tuesday. It usually closes at 5:30 p.m.

Brynn Hunt, a Rochester resident and first-time voter, was one of many to visit the site Tuesday morning.

"I voted today because of women like her," she said. Hunt said she wore white in honor of women's suffrage.

Early Tuesday, hundreds of people began to form to thank Anthony for her efforts.

The line, much like the lines to vote, is long. Jes Karakashian noted that the line "wraps around twice."

"I've never seen anything like this before in my life," she said.

Despite the long wait, said visitor Max Bourgeois, the mood was peaceful, proud and respectful.

But a sign near her tombstone reading "Sisters, take the wheel" expresses voters' ongoing sentiment: There is still a lot of work to do, but there are a lot of women to do it.